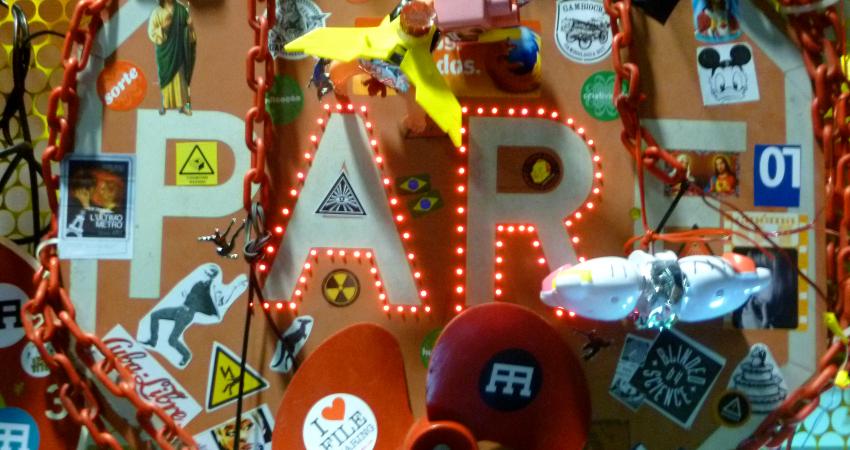 The functioning of the contemporary world is based on a complex network that, supported under the technological apparatus, reveals a paradox: the more organized and controlled its technical and social structures are (including monitoring our existence in real time), the more chaotic the human flow is revealed (between privacy and exhibitionism, is it possible to rely on networks?). Under this supposed order is also the management of the waste generated by such sophisticated dynamics: while government recycling programs and independent garbage collection initiatives are increasingly common and more standardized – including the use of technology for monitoring of such processes –, more unlimited appears to be waste generation. The pace of care seems to be insufficient in the face of the lack of control. We often have the illusion that technology allows the organization of all social processes and improvement of the quality of life of populations when, in fact, it can only be more enslaving and legitimizing the benefits of privileged ones. The harmful action of anthropocentric man on nature seems to surpass the technical sophistication achieved by our species.

Machines’ efficiency has always been whether celebrated or questioned by artists. Among the questioners, one name draws attention: the American cartoonist and sculptor Rube Goldberg, who in the first decades of the twentieth century became notorious for designing literally useless machines: “a deliberately complex contraption in which a series of devices that perform simple tasks are linked together to produce a domino effect in which activating one device triggers the next device in the sequence” (from Wikipedia). These structures became known as Rube Goldberg Machines and have since then emerged in different contexts: in the art world (such as in the video The Way Things Go, by the Swiss duo Fischli & Weiss), in science (entrance of San Jose Tech Museum), in the nerd universe (there are contests of creation of these machines in North American Universities), in the entertainment industry (Viva Pitagoras TV show) or even in the advertisement industry (see the celebrated commercial of Honda). The fact is that these complex and creative gadgets illustrate, in some way, the failure of our world organization. What is so much technology actually about?

As a response to the Rube Goldberg machines in the context of a world without control, the Gambiologia Collective, a project that emerged in Brazil in 2008, developed, in its trajectory, installations inspired by such gadgets, bringing their (anti) logic to the electronic context. They’re the Random Gambièrre Machines. Gambièrre refers to the fictitious patron of Gambiologia (Jean Baptiste Gambièrre), and his name derives from the word "gambiarra". In Brazilian Portuguese, it denotes an improvised adaptation, using the available (and scarce) material resources for solving an everyday problem. Gambiologia, which later became a larger project, with the involvement of dozens of collaborators from different countries around collective initiatives, is inspired by the “gambiarra” tradition for the creation of works and projects in art and technology. Instead of the precise sequence of Rube Goldberg Machines and the use of specific materials for their assembly, gambiological machines operate randomly, microcontrollably, and are entirely made from waste transformed into artworks. The purposes of both, however, are the same: the creation of a complex and useless machine, which questions and mocks the supposed technology-enabled world organization.

The process of creating a Random Gambièrre Machine is like a "hackaton of objects". Reused materials that have peculiar aesthetic or functionality are collected from flea markets, junk yards, thrift stores and trash bins. These pieces are taken to the gallery (or assembly space) and so are integrally transformed, circuit-bent, recombined, remixed and upcycled with the installation of electronics, becoming parts of a great techno-assemblage. No object remains original: they are all subverted, modified, hacked, and in the end, randomly controlled by a "microcontroller-brain".

The Random Gambièrre Machine is the pre-apocalyptic response to a society that cries out for organization and connectivity without, however, worrying about what is most crucial: quality of life and care for the globe. By bringing a mass of "genetically modified" waste into an institutional space, the work problematizes not only the over-organized functioning of contemporary technological society, but also our conviviality with the waste generated by our passage through the planet. The work, in its multiplicity of electronic elements, objects and wires, still suggests the interior of a complex technological system: the opening of a black box that holds within itself our own guts. All this smartly, in a good mood and with great aesthetical impact.

This project intends to setup a Random Gambiérre Machine (here called Máquina Aleatoria de Hackeo) at Medialab-Prado during Interactive '18. Such installation will be done collectively by the proponent, the collaborators and also by frequenters, in an open collaborative and procedural workshop format.

As unbridled technological development has an increasing impact on nature, we shall be creative about what to do with the remains of the consumption cycle. For this, technology must be under our control, under the risk of, in the near future, we drown in our own remains as we post, smiling, the next selfie.

“If we are drown in garbage, if the anthroposcene is on the agenda of philosophical, ecological and technological discussions, (…) gambiologia reveals the most concrete of our existence: the search for perfection and for the formula of life in the sciences on one hand, and an increasingly destroyed and trashed world, on the other. (…) The trash is our open guts, our main production, with which we cover the world.” (Raquel Rennó, Gambiólogos exhibition catalogue, 2014). 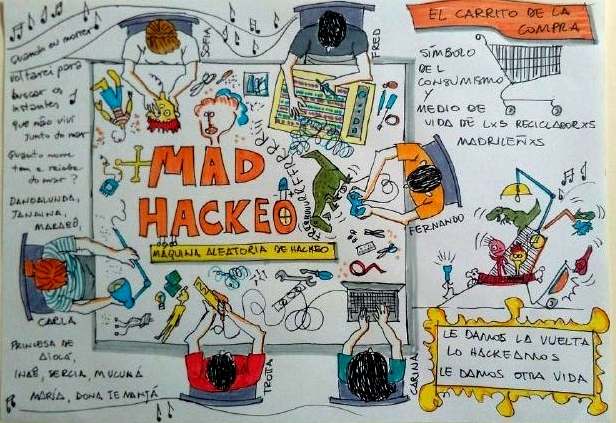 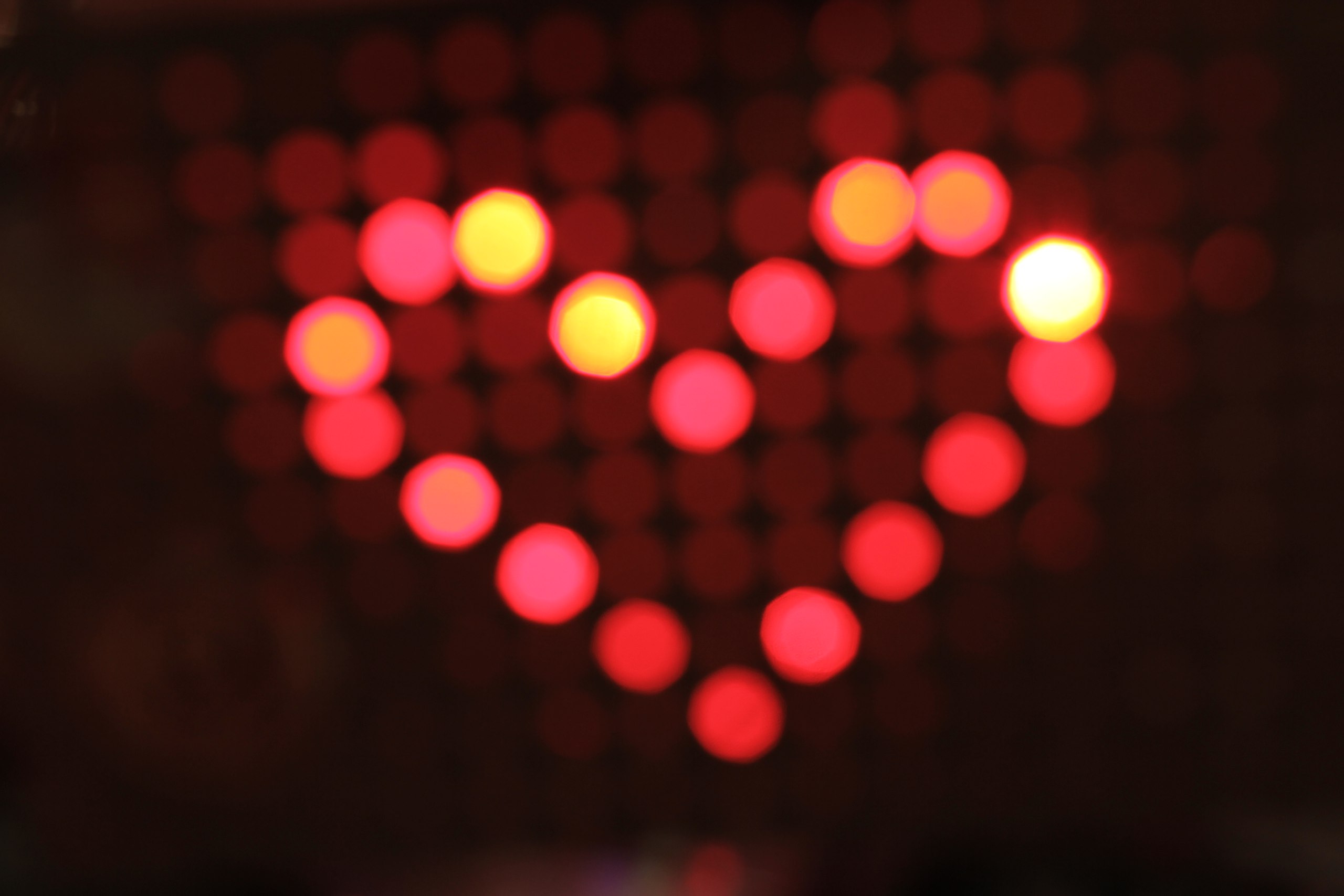 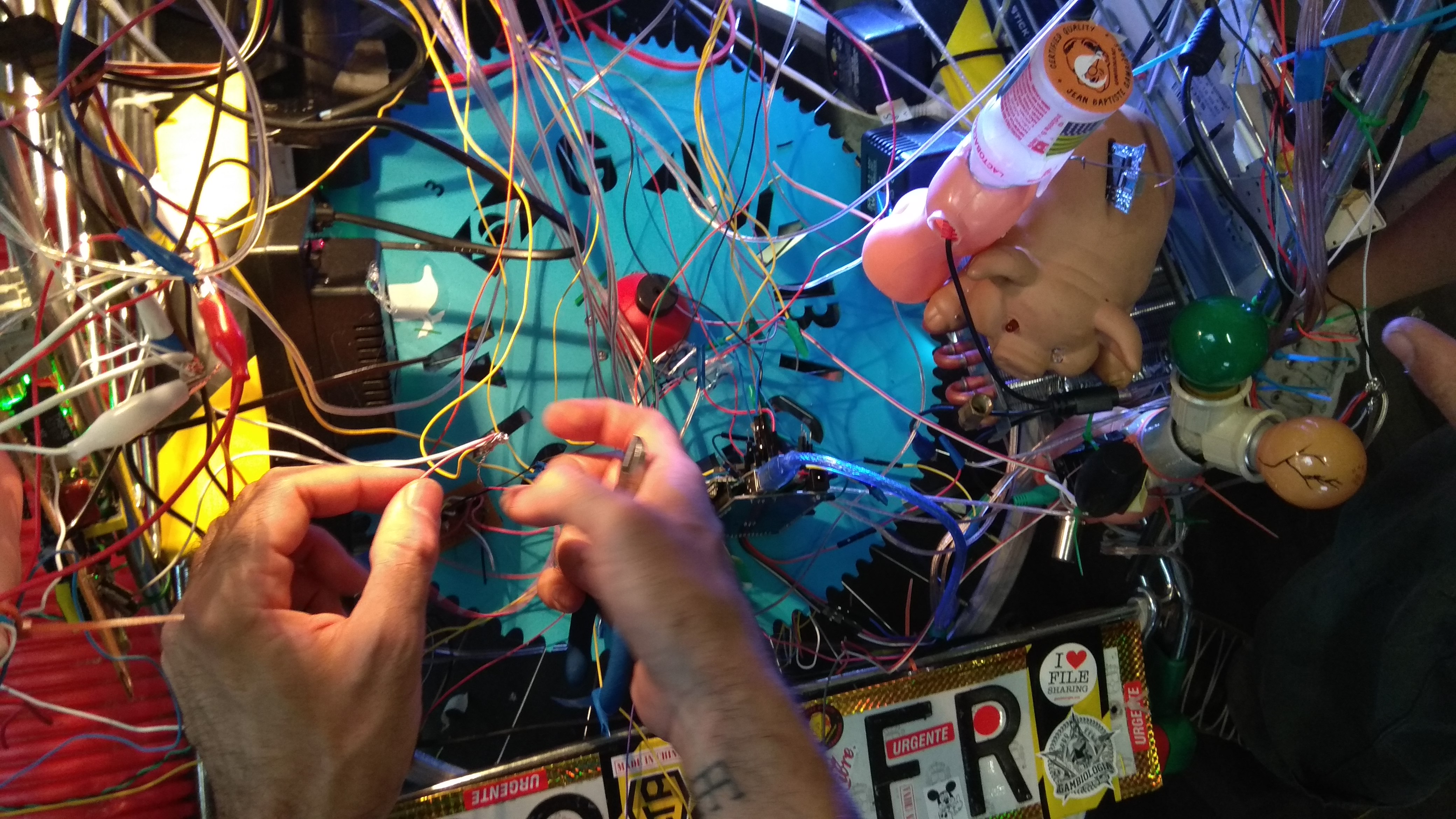 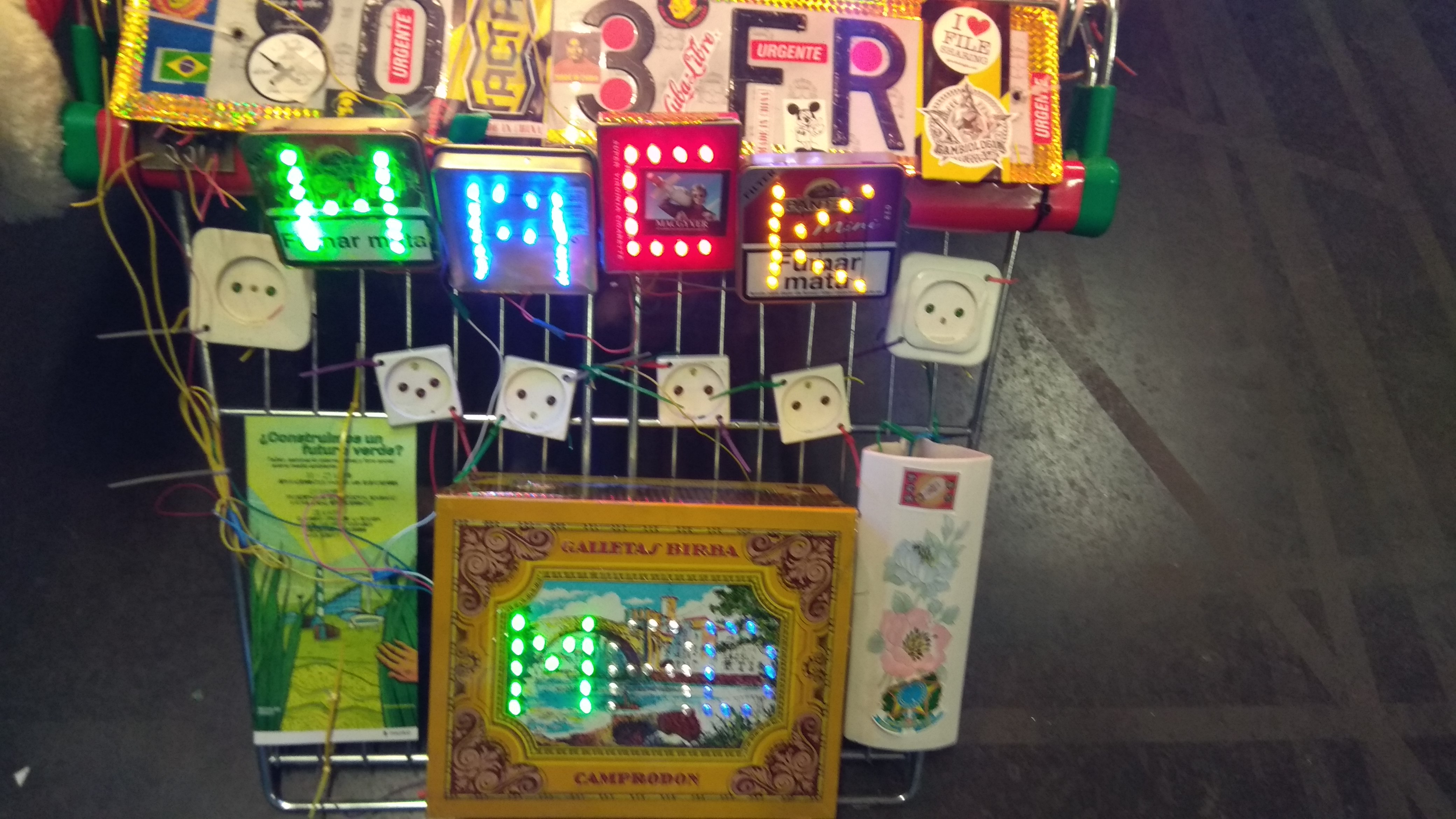 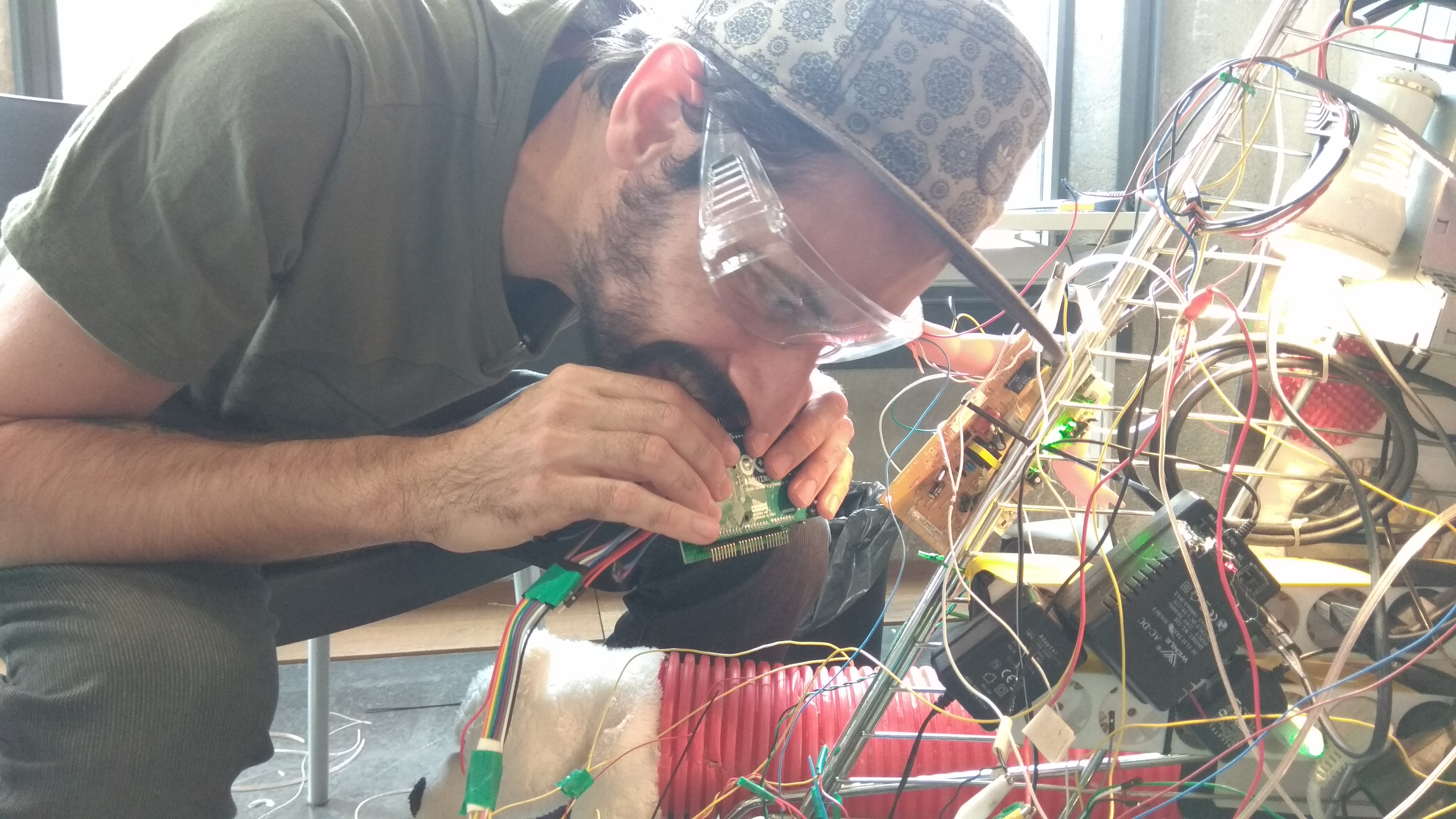 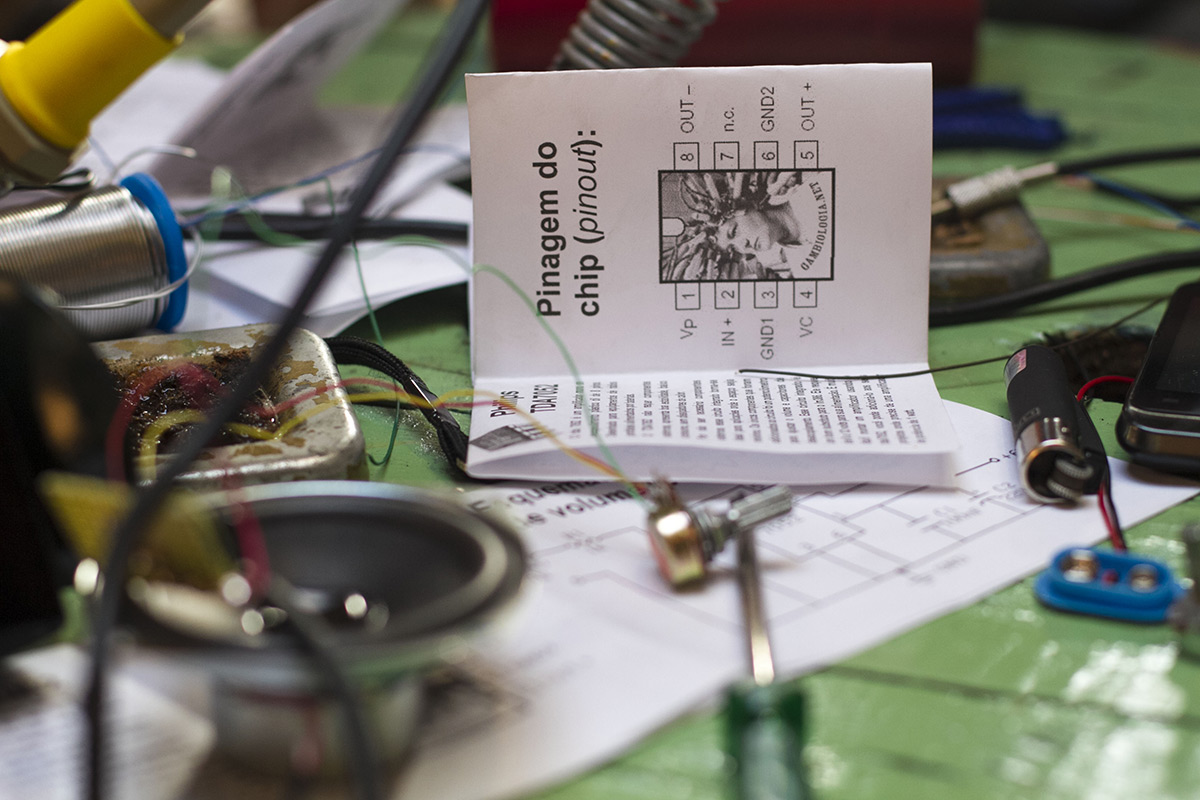 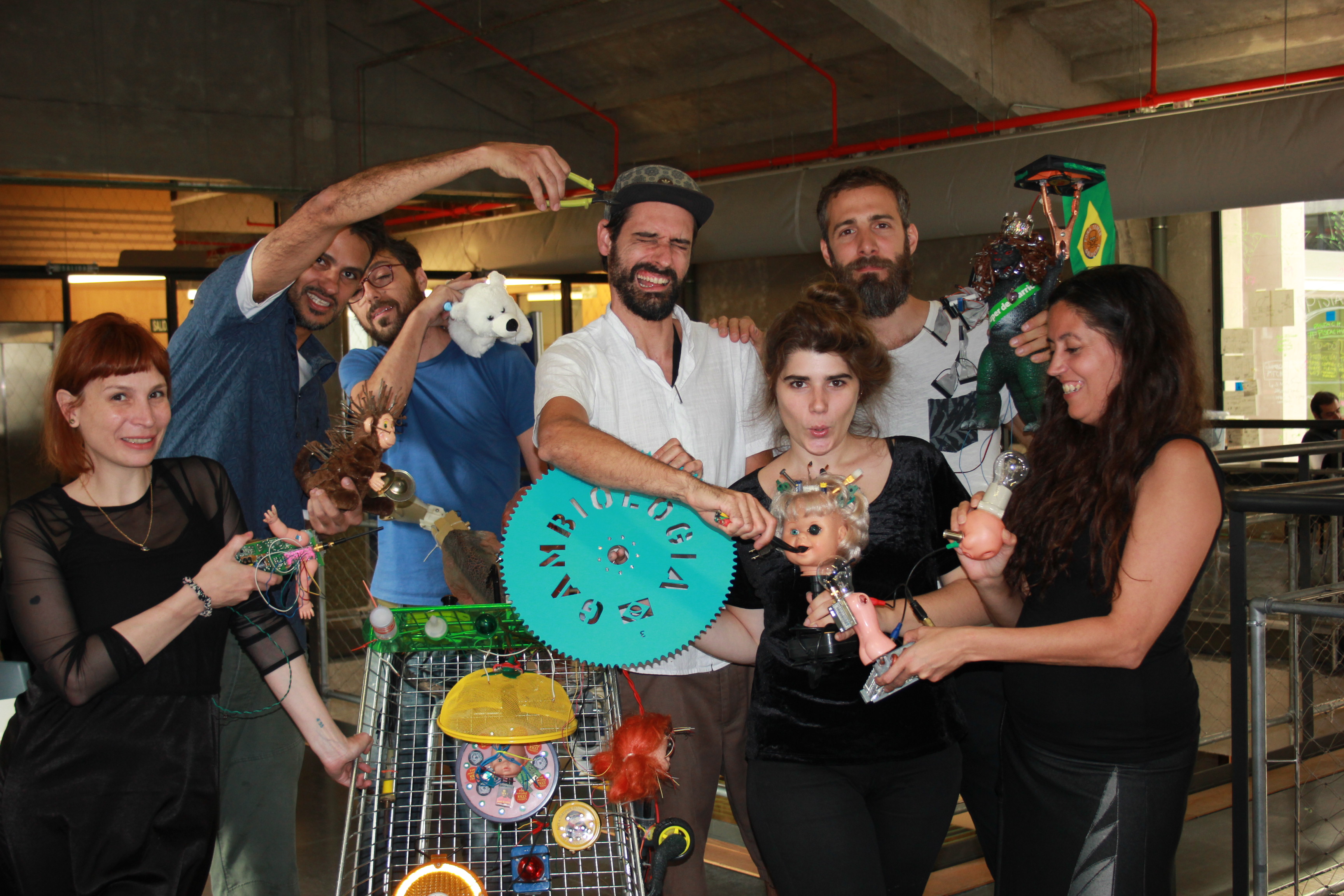 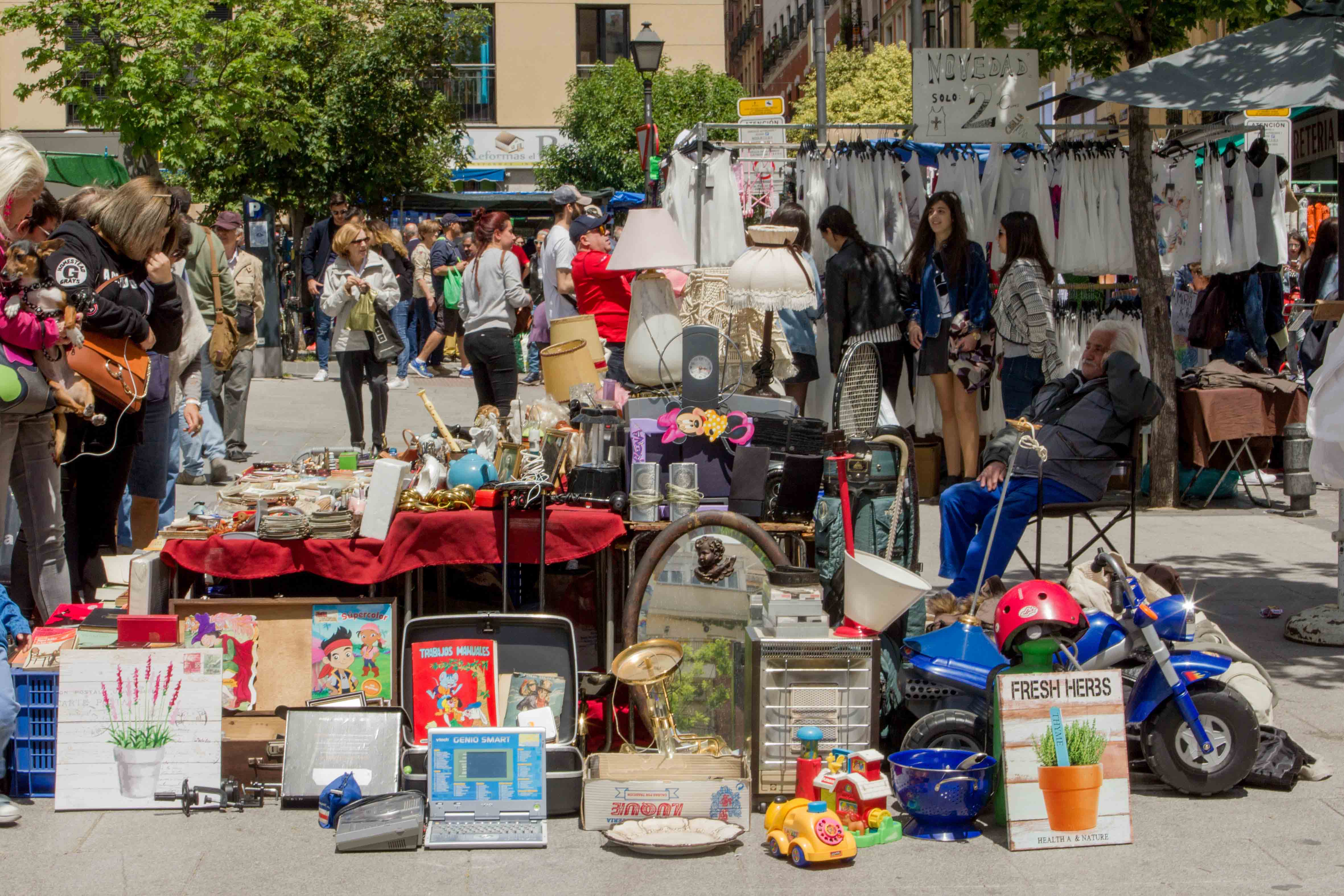 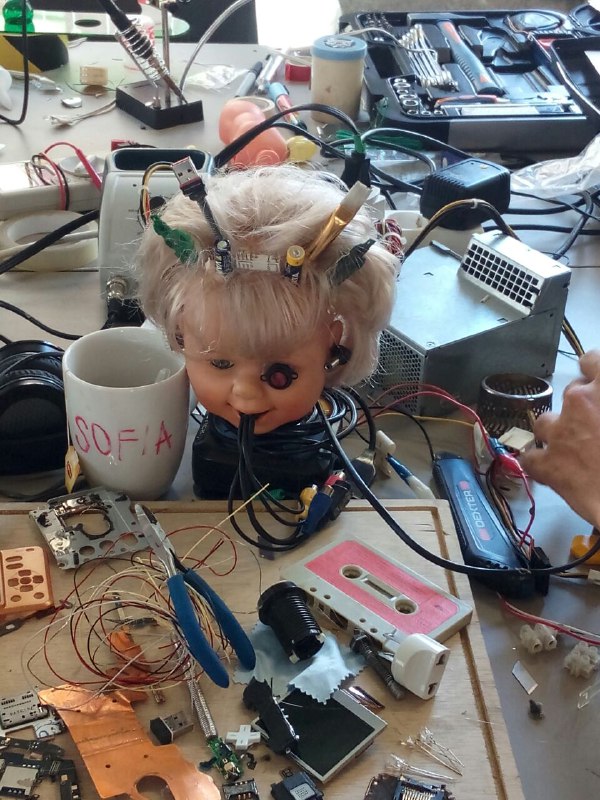