The new democracy is built in the cities 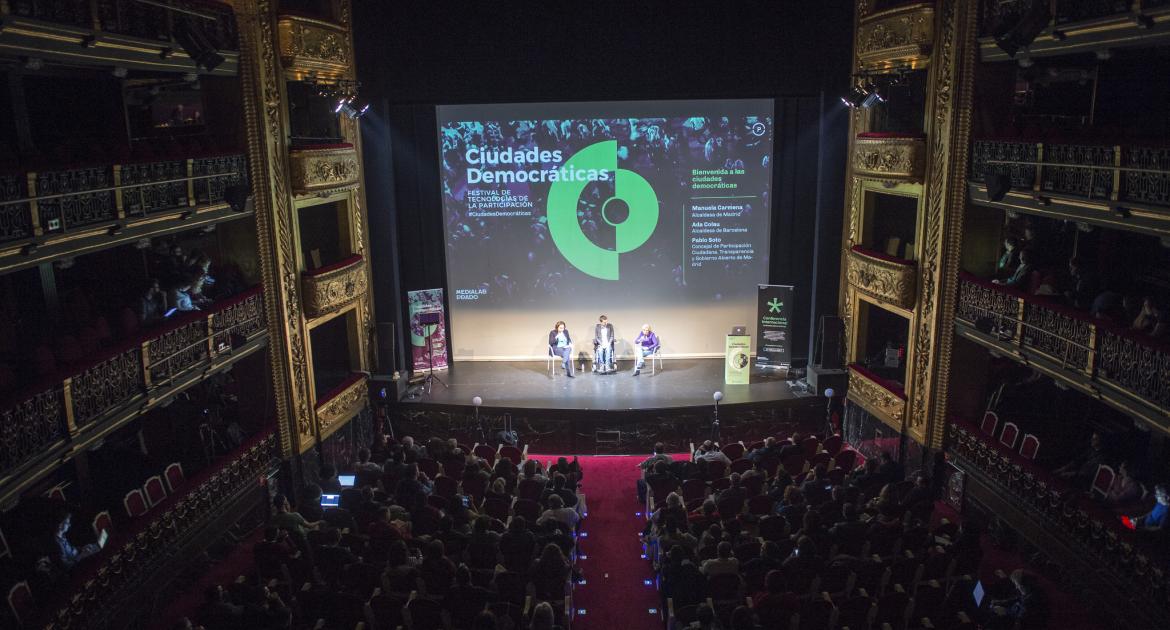 Some have more than 1 million inhabitants, some have less than 5 thousand. With more or less traffic, more or less populated, more or less built-up. Cities are the spaces in which we live, they are spaces of economic productivity, cultural creation, learning. Cities are spaces for change and the gateway to twenty-first century Democracy: participatory, collaborative, inclusive, technological, and feminist.

“Democratic Cities”, the festival of participation technologies, took place on the 17 and 18 November in the Teatro Español in Madrid. The festival involved 2 days of international conferences, with experts and the general public gathered together to reflect on and think up new participatory processes adhered to the digital tools that are transforming our cities.The Mayoresses of Madrid and Barcelona, Manuela Carmena and Ada Colau, welcomed everyone to the seminar on the Saturday. Their testimonials demonstrated that in the times we live in, dialogue is both possible and necessary. They both acknowledged and agreed that “the democratic revolution of the 21st century will take place in the cities or it won’t take place at all”.

“The 21st century is the century of women. With more humane and kinder cities, predicted Ada Colau. And she went on to say: “Real democracy can only be from the bottom up”. Manuela Carmena was very much in tune with Ada Colau when she said that she was working for “a more profound and more real democracy”. And that such a democracy “is possible in cities”.

The Mayoress of Madrid’s past experience as Judge and Magistrate was in evidence when she suggested that collaborative legislation is an essential element for civic participation: “Participation is going to reform the structures of the institutions and, more particularly, through “crowd law” it is going to transform the legal world”.

Cities provide an opportunity for innovation and experimentation. And this is where technologies come into play. They are the key tools and an intrinsic part of democracy in this century, and citizen empowerment is achieved through and with the new technologies. For example, individual experiences were shared during the International Conference, with specific cases from local governments in cities such as Belo Horizonte (Brazil), Montevideo (Uruguay), Taiwan, Hong Kong, Cordoba (Argentina), Jalisco (Mexico), and Tunisia.As she told the audience about her experience and administration, Aurea Carolina, a Councillor from Belo Horizonte, showed that it is possible to implement policies that are collaborative, open, popular and participatory, something that translates into a feminist and anti-racist mandate. “People should effectively be agents for change, able to decide and become involved as the people who are responsible for the processes”, the Councillor said.

Meanwhile, from the other side of the globe, Benny Ng spoke about the grave situation there is in Hong Kong in the wake of the Umbrella Movement, and raised the need to deepen the democratic change that is being produced by the new technologies. It is in that context that they have set up the “Demosisto” political party. Its manifesto states: “We trust that the community will become aware of the common good and will build a city of multiplicity, equality, and justice.” From Tunisia, Lilia Weslaty spoke about the achievement obtained after the Arab Spring, the Revolution for Freedom and Dignity that led to the drafting of a new Constitution: “A lot of people were calling out for this new Constitution. They needed to be part of it”, said Lilia. She also told us how the transition from a single-party to a multi-party political system has gone.

For his part, Shu-Yang Lin, co-founder of PDIS, Taiwan, reminded us how important it is to work with free and open-source technologies, given that “every decision made (by a government) should be as transparent as possible”. To these voices we should add the myriad experiences of Latin American governments that shared the importance of civic participation through digital platforms, civic consultation, participatory budgeting and transparency, and open government portals. The International Conference of Democratic Cities brought together specialists from different parts of the world to reflect to reflect on these issues.

Birgitta Jónsdóttir, an Icelandic poet and president of the International Modern Media Institute (INMI), motivated everyone with an opening poem: “Now is the time to go to where the action is. You are the drivers of change”. She put her faith in our being able to change the world as individuals, and she shared her experience of the creation of a collaborative constitution. “People have the ability to make informed decisions in an open and direct democracy”, she said. In the same line, the expert in collective intelligence, Tanja Aitamurto, stressed that “democracy really has to do with participation and we have to be active”.

A new issue that was raised in the debate was that of Sortition or “Democracy by Lots”, a system that is put into practice in many cities of the world, for example in the United States and Canada. Terry Bouricius, a theoretician and politician with experience in this matter, explained all about this form of democratic innovation because, as he said, “most citizens with a vote don’t vote or the ones that do vote use short cuts, because they don’t have enough time”. So, faced with this scenario, the question is how do we choose random citizens willing to participate?

One of the main ideas that circulated around the Teatro Español had to do with what type of cities we want to live in and the fact that to achieve such a city, we have to create it among everyone involved: the government, the institutions, and the residents. The panel of “Power to the Residents” bore witness to that fact and to how residents are the main players for change and social transformation. Doménico Di Sienna, from the Civic Wise network, introduced the real protagonists of change, Kevin, Adriana and Rosa, who told us about their first-hand experience of the dynamics of the participatory processes that occur in local forums in Madrid’s “Experimenta Distrito” (District Experience). This panel also reflected on the concept of “participation” and its essence: “Participation can take many forms and is more interesting when we can all work together to allow these different forms to coexist and be promoted through different areas”, Di Sienna stated.

We live in times of change. We are going through times when we need to rethink what kind of democratic system we want. The places par excellence in which to experience processes of democratic innovation are citizens’ laboratories: learning spaces where we can collaborate, play, share, and transform. “Democratic Cities” featured the experiences of five labs that have set a trend in the world: Digidem Lab from Sweden, Signa Lab from Mexico, Lab Hacker CD from Brazil, Metadecidim Lab from Barcelona, and the host, MediaLab Prado from Madrid.

“How can we delve deeper into participation in Democracy?” asked Manuela Carmena during the inauguration of the seminar. Following 2 days of reflection and exchanging experiences in conferences, debates and panels in the Teatro Español and in MediaLab Prado, the international conference “Democratic” Cities has confirmed to us the trend of recent years: cities are the gateways to the new democracies. How? By innovating in democratic participation processes: direct democracy, sortition, citizens’ laboratories, participatory digital platforms, social movements that combine on-line and face-to-face participation. Sharing the know-how of the general public, exchanging knowledge, applying collective intelligence. Through transparent, open governments and with the values of the culture of women.

Democracy is progressing, of that there is no doubt, and today it is the majority system of government. “We have to collectively make the most of these opportunities”, said Pablo Soto, the Manager of the Civic Participation, Transparency and Open Government Department of Madrid City Council. “Democratic Cities” opened a door to hope. It was clear that each panellist, exhibitor and participant shared the general conviction that by working in a coordinated and collaborative way, generating synergies between local governments and the general public, we can achieve a more democratic world.

“The nucleus of change lies in the cities”, said Manuela Carmena. “Cities need to have more power”, stated Ada Colau. An idea and a spirit was blowing in the wind of Madrid: if we want real democracy, the democracy of the 21st century, we need cities, participation, and empowered residents. 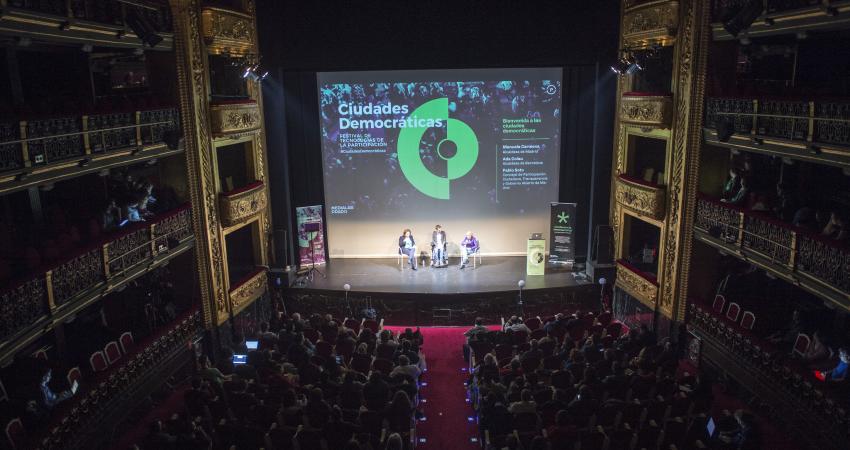