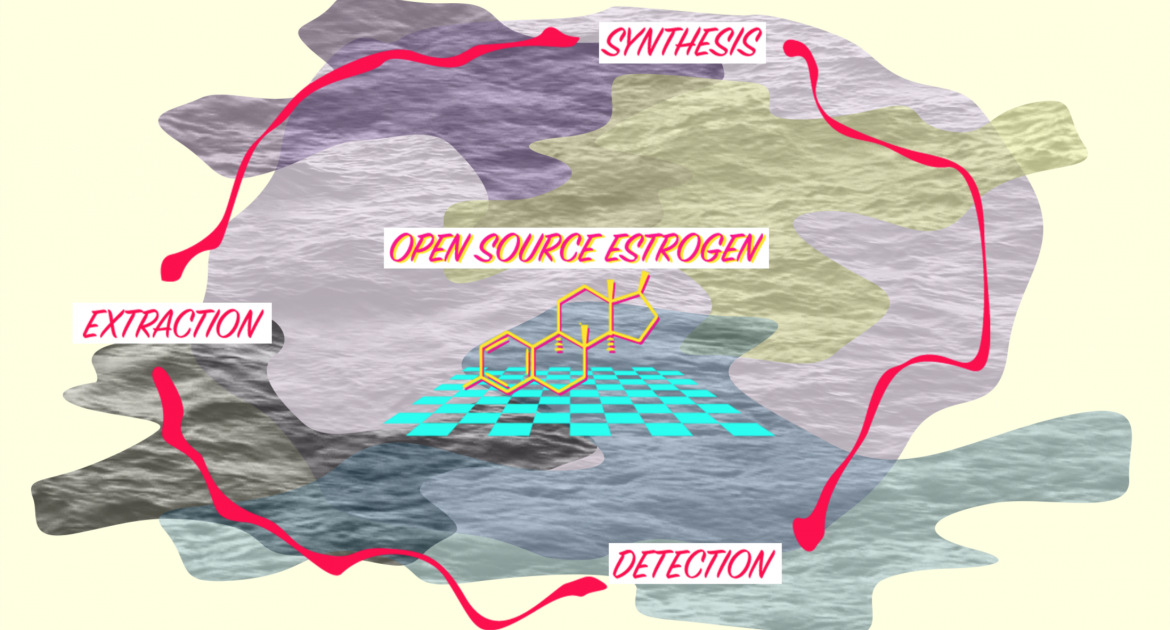 The aim of this project is to develop tools for rapid prototyping of ultra-large objects of "future" application in the proposed fields: clothing, ecology, and citizen science. Technically the project goals are to develop 1) hardware tools for building complex objects from a basic unit expandable to a variety of sizes, eg an inflatable balloon, the tool will be a kind of extruder that continuously inflates balloons and sticks them to previous ones and 2) complementary software tools that allows to manually and/or automatically design objects which can then be created with the physical hardware, this software will allow to convert any three dimensional form into a grid of ballxels: three dimensional pixels with variable radius spherical shape. In addition to developing the described prototypes, participation and creativity of collaborators will be motivated to find new applications and uses of these tools, modifications that will generate new tools and tests with different synthetic and natural inflatables by performing ideation sessions. 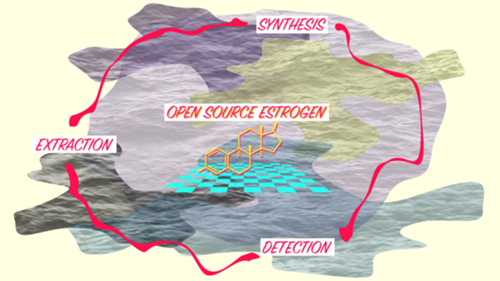 The goal of Open Source Estrogen is to explore the various ways that estrogen performs molecular colonization of human society, our bodies, and ecosystems.

Estrogen is the most ancient of sex hormones. Therefore the mutagenic effects of environmental estrogens disrupt species across all animal taxa, including humans. In response to the ongoing molecular colonization of xeno-estrogens, the project aims to demonstrate how our collective mutagenesis necessitates civil action through DIY/DIWO practice. Three possible approaches are: 1) SYNTHESIS - Are we able to circumvent governments and institutions to gain hormone access? What are the ethics behind self-administering self-synthesized hormones? 2) DETECTION - What are the ramifications of estrogen de-regulation? How can biosensors play a role in mobilizing citizen surveying of local water sources? 3) EXTRACTION - How can citizens remove the hormonal toxicity in the environment that is currently mutagenizing human and non-human bodies? Can the xenoestrogens be recycled back into our bodies? 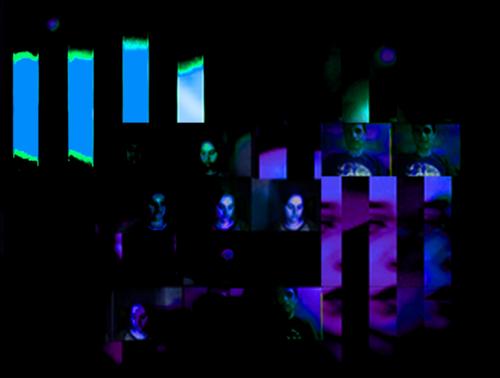 LiveLab is a proposal for an open source, browser-based toolkit for networked performance. The virtual collaboration space uses a peer-to-peer mesh network to share video, audio, and data streams between individuals and venues. LiveLab is based on WebRTC, and thus can be used by anyone with a web browser. The initial prototype--https://github.com/ojack/LiveLab-- also allows participants to route any data stream broadcast over OSC (such as Kinect skeleton or sensor data) to remote collaborators.

The initial idea for the project was proposed by CultureHub Art & Technology Center as a reaction to the limitations of proprietary technologies being used for networked performance, distance education and telepresence exchanges. Founded in 2009 by La MaMa Experimental Theater Club in New York City and the Seoul Institute of the Arts in Korea, CultureHub has been researching and exploring a variety of platforms for producing distributed shows, workshops, and cultural exchanges. Under current systems, collaborators are limited to expensive video conferencing hardware, fixed layouts, and minimal control over routing video and audio streams. We are interested in creating an accessible and open-source toolkit that allows for flexible configuration and experimentation between performing artists and live-media practitioners in geographically distinct locations. This includes custom routing of audio and video feeds from multiple collaborators, video compositing and remixing directly in the browser, audio controls, and routing of sensor data.

During the workshop, we hope to expand on the prototype by creating the audio-visual mixer portion(s) of the project. The investigation and development is motivated by questions such as: how do performers navigate physical and virtual environments? How can technology such as sensors and motion detection allow performers to “feel” each other at a distance? How do interactions scale from one-on-one to many at a time? How can technological inevitabilities such as latency, glitches, and decoding artifacts be used as choreographic elements? What happens when an online audience becomes a part of the performance?

Evolution of a departure by Ana Laura Cantera (Argentina) 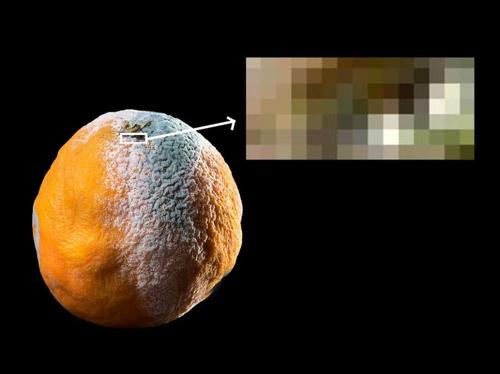 “Evolution of a departure” is about fading of life, weakness and the constant transformation of us as bodies of nature. This piece of work will be ephemeral. It will develop and will die in a specific moment. As life.
The organic matrix will make of modules constituted by quadrates of leaves that will be alive pixels of the organic screen. The sum of all, will reproduce a pattern of the rot of a fruit, being the matrix, a magnified image of it. It will have different kind of sensors and electronic devices that control and speed up the natural process of disintegration of leaves, through the growth of bacterias, fungus, and microorganisms in the surface of each module. It will promote a new design in the matrix, as well as the return of the leaves as mineral substrate restarting the cycle of life again.

In the matrix, a moisture sensor will be the first responsible for sending information to a system that humidify through hoses the leaves. The more moisture between them and the bioplastic, the more whitish the surface will be by the growth of the microorganisms. Moreover, a fuel cells system controls the increase of organic matter through the quantity of energy it is possible to get from it. If the energy rises, we could realize that the descomposition process will be carrying out in a good way. 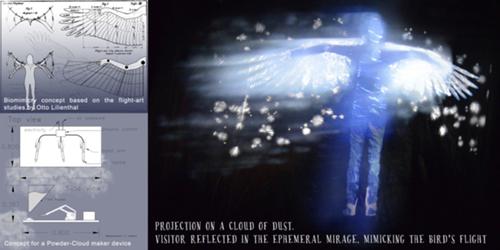 This proposal aims to project interactive images onto a dust cloud.
Inspired by one of the earliest biomimetic inventions in our history, the wings of Leonardo da Vinci: The human dream of flying ... this way humans resembles angels.
Wings white plumage, moving, projected onto a cloud of dust, they appear and disappear with the cloud.
When the visitor enters the space covered by a depth sensor (kinect), the wings belong him and follow the movement of his arms in real time. His own image is (like) reflected on the dust cloud, a mirage, which becomes sometimes more defined, sometimes more blurred.
The sound of wings, a generative composition, sound of feathers moving in the wind, helps to blurring the boundaries between virtual and real.
Our intention for Interactivos16 is to make a device for produce the dust cloud and to develop the code for the interactive interface with kinect, which will generate images and sounds, and also will control the dispenser cloud device, to finally present all the work as an audio visual installation. 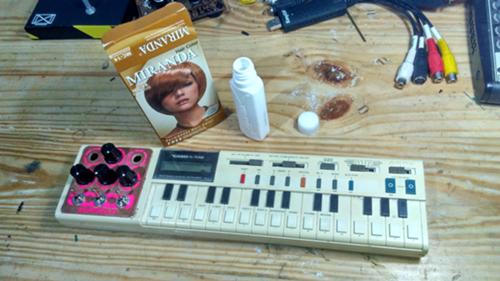 The development of urban areas has made convenience store spread all over the cities and become citizen's source of daily supplies. Convenience store became the edge of distribution for producer that competes in developing their products in order to “serve” the citizen’s needs. With the rapid growth of convenience stores in urban areas, it has become a powerful agent of Consumerism.

Its easy access however has made a laboratory supplies for citizen to conducts experiments and find other functionalities or uses of the products available. Citizen could become amateur scientists by mixing together or taking a part of the products for their creative purposes. The Internet allows them to distribute their findings while also allows them to imitate and adapt others findings in their local area.

Conveniencely Yours is a project exploring creative experiments on the use of consumer products that is accessible in the convenience store. The project invites collaborators to analyze and investigate local consumer products then experiments to find other functionality and uses of those products. The projects also invite the collaborator to document their findings for further investigation with experts and also create a tutorial for knowledge sharing.

This project will research on the use of products that could be useful for citizen/amateur labs, artistic/creative production and amateur biological experimentation. A dedicated blog will be created to document and  share the process, tutorials and findings of the research. The project will be also guided by specialists to ensure the safety of the experiments.

Conveniencely Yours would like to bring the role of citizens as activists by
directly involve the participants in the investigations. The project also would like to bring citizen tactics which creatively use accessible technologies for their  daily life needs. The project will take the form of consumerism activism at the      present time where the citizen themselves act as their own agents for the
protection of the consumers. 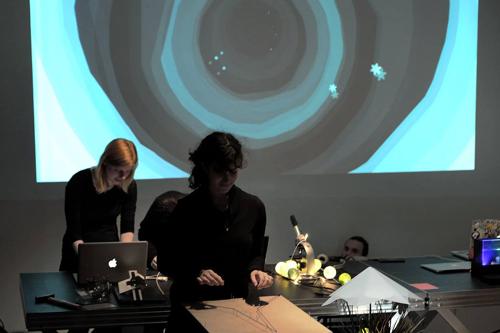 A digital instrument and sound transformation device that works with the resistance value of a stretch sensor.
The sensor allows input values with a very analogue connotation, like the sound pattern of a guitar. At the same time the values can be digitally manipulated and the circuit where the sensor is embedded can be bent and shortcutted manually by using additional sensors and buttons.

During the workshop the stretch sensor/MaxMSP interface (already finished) can be extended by this more complex circuit. As soon as the working group decided on the input possibilities to use, lets create a customized housing for the new instrument (3D print?) and play it!

In the end the instrument can be part of an orchestra, used to generate and alter visuals and as a teaching tool to understand electronics and sounds. 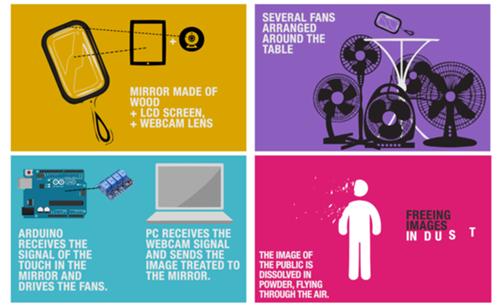 Modern society imposes its standards. Men, children and especially women have their self-esteem challenged for centuries. Today, apparently, this imposition became a massacre. Patterns of an unattainable beauty are imposed by the media. The result is psychological disorders, eating disorders, fear...
The cult of self-image, the selfie, advertising of itself. Open the computer screen and see patterns. apparent happiness standards, superficial, unattainable.
And what if we haven't any self-image to cult anymore? We would be free to feel, smell, touch, see? To live?
A mirror rests on a table. Many fans are arranged around it.
At the touch of my hand on the mirror, the fans blow. As I watch my reflection, the wind blows with more and more strength. Little by little, i see myself being turned into dust. While the fans blow, my image dissolves into grains. My dust floating through the air to disappear. The wind ceases. Now, there no longer remains anything. Just me and my empty glass. I am free?