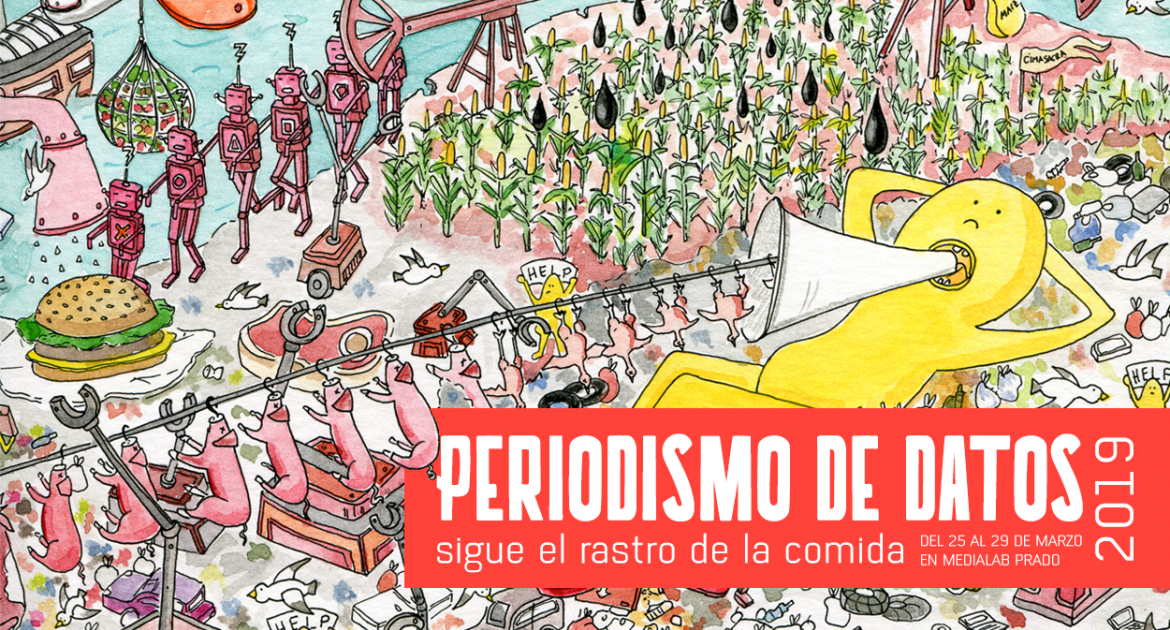 In 2019, the work of the Interactivos'19 and the Data Journalism workshops is going to focus on the complex world of food, with reference to the SDGs. #followthefood

We invite you to analyse, narrate or redesign, in a creative and radical way, changes in the food models that can serve to reduce the likelihood of environmental collapse.

The landscape, the territory, the use of resources, fertilizers, cropping and breeding systems, logistics, distribution, consumption patterns, the food culture, social relations, waste, the contamination of the different models, etc., are just some of the possible perspectives.

As is the case with any production workshop organised in the Medialab-Prado Cultural Centre (which reports to Madrid City Council), the selected projects will be the result of an open call that will be announced at the same time as the actual workshop itself, that is, on Friday 26 November, ending on 9 January. One week later, on Monday 16 January, the selected projects will be announced and the call for collaborations launched.

Anyone can participate in any of the two calls for the two programmes. As far as the Data Journalism call is concerned, there are several new features this year:

However, there is another fundamental innovation: the workshop will be taking place from Monday to Friday, from 10am to 8:30pm. An intense week during which a journalistic project based on data must be completed.

The workshop begins on Monday 25 March and ends on Friday 29 March as follows:

Can I submit more than one project?

Yes, you can submit more than one project, although only one will be selected.

Can I sign up for the Interactivos? open call and for the Data Journalism Workshop one as well?

Can I submit a collective proposal?

Yes, you can submit a collective proposal. In such a case, only one person’s travel costs will be covered, but the others can sign up for the collaborations open call and their accommodation will be covered.

Can I submit projects that have already begun?

Why have you changed the schedule?

In the first editions, the data journalism workshop was held over two weekends in two different months, with a free month in between. The first session included a talk and a workshop with international speakers, the projects got under way, then they had a life of their own during the month in between until finally, they were rounded off and presented during the second session. We even held a competition and we nominated a winning project that was supposedly published in the El Confidencial newspaper.

In 2016, we began holding informal intermediate sessions and in 2017, we decided on a workshop with 3 sessions and an additional preliminary session, on the open data day, which meant that five of the eight selected projects had been announced by that day and team work had already begun. Up to this point, the ecosystem of the workshops had continued to grow.

However, in 2018 we increased the number of sessions to five and we encountered lots of organisational problems, most of which weren’t in fact attributable to the workshop itself, which made it a somewhat atypical year. In 2019 we decided to take a gamble: one week, from Monday to Friday, with a symposium on day one, team building dynamics, specialized mentoring and collaborative and multidisciplinary work in the best case scenario… what could go wrong? We’ll know on 29 March 2019.

Write to visualizar AT medialab dash prado dot es to resolve your questions, or open an issue at Github.