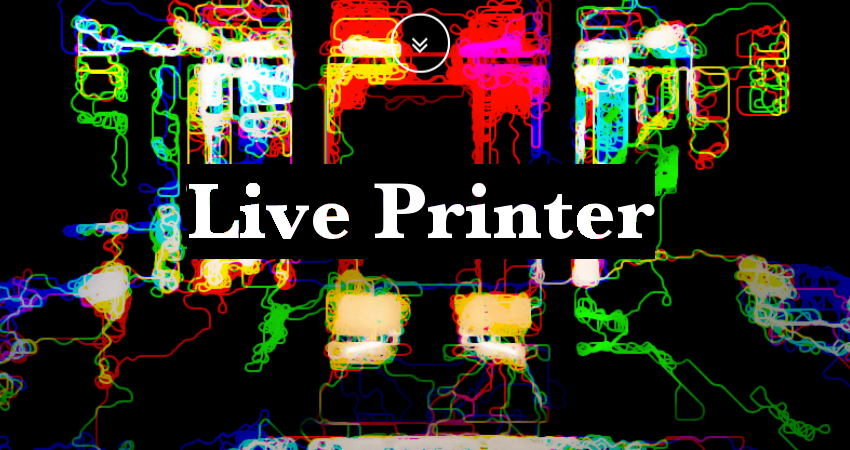 This is a workshop that introduces participants a novel system for making physical shapes using livecoding and 3D printing, called LivePrinter. LivePrinter was designed as a cybernetic system that evolves over time along with its parts: people, machines, materials, languages. The system brings together a collection of widely-used, hackable systems using open source hardware and software such as Marlin 3D printing firmware, Python, G-Code, and JavaScript and other web technologies running in web browsers. These tools are bound together by an extensible livecoding environment that can run on any modern computer. Creative practitioners can use it to extend their reflective practice through the act of livecoding both physical forms and the livecoding language itself.

Most designs for 3D printing and automated production are born in a computer and are hatched into a physical reality. This area of computational physical design is lacking in, ironically, a sense of the physical. They must rely on computers from the start of their idea to the finished object, which more-often-than-not fails to come out as planned. At the high end, this process works with a degree of efficiency: professional designers have access to expensive, powerful computational tools and the collective manufacturing experience that comes from working in industry.

At the low end, for students, home offices, small businesses, and crafts practitioners, it is a wasteful and inconsistent process that can produce novel results but at a considerable cost of time, materials, and energy. The design process is still iterative, but the designer must wait until the entire process is finished before iterating a design. Feedback given along the way is screen-based, a best-guess simulation or simply suggestions of best practice reflected in colour-coded on-screen models.

The designer starts in one CAD program, moves to another 2 or 3 to "clean up" their model, then yet another one that prepares it for printing. during the print, they have little direct control until the physical object is finished or fails, the latter happening much more often. This process is disjointed, complex, and brittle. There is a lot of waiting involved, for rendering, slicing, and printing. It is not a "live" process. (Raskob, 2018)

Liveness here is a direct connection between designer and the medium they are designing for. Direct here means that the designer can make a change and instantly (or near enough) experience that change, in that medium. For example, a traditional designer working with wood in a live manner can touch the object they are making, hold a piece of sandpaper to smooth it, use a bandsaw to cut it, and both see and feel these effects as they happen. The speed with which a trained carpenter cuts into wood with a saw changes the nature of their cuts: depth, width, roughness.

This quality of liveness in art and design is an important part of “cybernetic process pattern of experiential evolutionary learning” (Jonas 2015). It recognises that the creative process involved in making new forms is evolutionary and abductive (Michl 2002, in Jonas 2015). The practice of making physical things often amounts to guesses and previous experience, making reflective practice a primary mode of research for many designers and artists.

In LivePrinter we have taken a cybernetic approach to design (Figure 2.), defined as “Research AS Design” by Jonas. LivePrinter puts an embodied, intentional “observer” inside of a system for physical computational design, concentrating on the production of ‘variations’ as raw material for the design/inquiring practice (Jonas 2015). In this mode, design is a learning process that generates knowledge about:

1. possible, novel physical forms
2. the possibilities of user-facing code syntax and limitations of computer languages 3. the mechanisms and physics of 3D printing machines
4. the properties and usage of 3D printing materials
5. the software architecture of live systems

The LivePrinter system is designed to be a loose framework of functionality that brings together several asynchronous activities, such as applied thinking & designing with code, controlling a manufacturing machine, and handling the communications between the two. It was developed in co-design activities with the author and livecoding and design practitioners. This workshop will further test and extend the language of the system.