The original aim of the project was to explore issues related to water, especially water use and availability - "Where do we get our water from? How are we using it? And how much are we using?" We had no fixed path at the outset so we envisioned an open process where we could discuss ideas and find a path forward with interested collaborators.

We found campaigns trying to urge people to lower water usage to sustainable levels interesting and tried to find data to visualise the global situation. Data on sustainable use of water is lacking and difficult to calculate, and therefore hard to show in a visualisation.

Physical availability and use of water is easier to show but does not highlight the problems of access and real shortage people face in many countries. Nonetheless it is interesting data and we experimented with a few visualisations using this data.

> Find more information on the Wiki and http://hydrostatusofnow.org/

The main objective of this project is to facilitate an exploration and understanding of the process of scientific and technical development in the world in recent decades. To do so, a detailed, accessible and homogeneous data collection is offered: US patent records, which document a fundamental aspect of technological innovation, not only in the US but also worldwide.

We use text analysis and citation relations among patents to identify trends and relations of influence by technological fields and periods. These analyses have taken shape in several interactive visualizations that enable a dynamic exploration of salient features and large scale regularities in this gigantic, hard-to-manage body of data.

There are various types of visualizations, such as “stream graph” type graphs, which show the total number of patents registered over time. As the mouse moves over any intersection of the year and segment, the exact number of patents registered at that time is shown. A click recovers a list of the most relevant (most cited) patents for that particular segment and year.

> More information on the Wiki

How much is piracy hurting the music and film industries? Do pirates have better taste than legal consumers? What can you pirate in the first place? The Pirate Bay, facing death by Swedish court, recently released their 20GB torrent database as a single download.  hus, we may be creating a eulogy for a once great hub of piracy.

During Visualizar, our project will have three phases. First, we will brainstorm the questions this data could (visually) answer. Second, we will code prototype visualizations relating to as many of our questions as possible. And finally, we will decide which questions have the most beautiful, stunning, surprising, or elegant answers, and we will build polished results. The results will of course be visualizations—whether interactive, print, animation, or otherwise—and will be delivered at the end of Visualizar and on ThePiratePie.org.

What do they have? Alternate Visualizations of Museum Collections 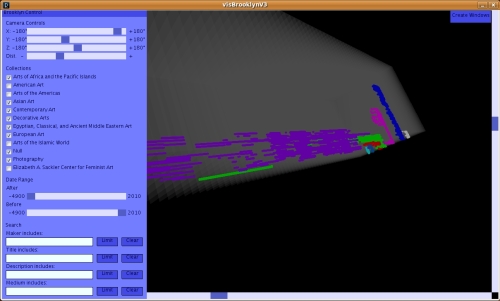 Museums are increasingly adopting open data policies, both for easy internal reuse of data sets and as a way of building community engagement online. While the opening up of data is a welcome development, too often key audiences see too little of this information through too small a keyhole. As linked and open data formats and Application Programming Interfaces become more common for cultural repositories, providing a sense of the scope and shape of museum collections is moving from a problem of data access to one of presentation.

This project will develop a set of visualizations appropriate for aggregate museum collection metadata, but with an eye to answering different questions than most museums currently address online. Focusing on the two dimensions most likely to be available in museum metadata, time and space, the visualizations will try to convey the sense of place and ascribed cultural value over time as represented in collections.

Visualizing public data about (global) cultural heritage can suggest how one culture sees another and lead to a more open discussion about how the story of public culture is being told.

> Find updated information on the wiki 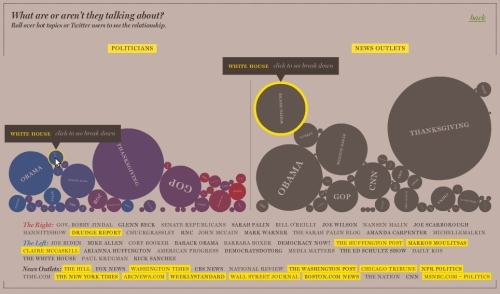 New Political Interfaces is a study of how politicians and the media act on social networks and especially of how people act on political messages.

What themes are shared and not shared by politicians and the media? How significant are they for each of them? How are messages disseminated? Are there any dissemination patterns?

To answer these questions, we focused on Twitter as a social network and the USA as the political media axis. Thus, we can compare the messages and their conservative and more progressive contents with the media and study possible correlations.

> More information on the wiki and http://newpoliticalinterfaces.org/ 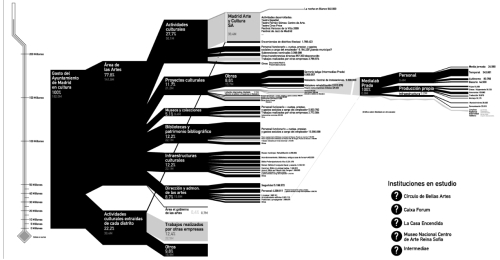 An analysis of the budgets of a set of emblematic cultural institutions in the city of Madrid, beginning with the City
Government. As a result of the first phase of this analysis, we have obtained this graph, which will serve as a basis for the future visualization tool.

Our goal is to expand the study in depth and breadth, include other city institutions, and manage to visualize these data in a way that citizens find easy and accessible. To do so, the group is open to new people interested in taking part in the research and the development of the tool.

SUC aims to serve as a warning tool on the information contained in databases. To do so, it uses Benford’s Law, a statistical law that tells us what rate of appearance to expect for certain numbers that are the first digit of large amounts. Specifically, it states that the number 1 appears more frequently as the first digit than 2, 2 appears more often in that position than 3, 3 more often than 4, and so on up to 9, the least frequent of all. Such large amounts are found show up in everyday life in invoices, budgets, gas emissions rates, voter participation in elections, etc., and they conform to Benford’s Law, which makes it a mechanism that can be used to detect electoral fraud, inaccurate entries in budgetary information, etc. To do so, a world map will be made that sets forth the “quality” of data according to their geographic origin.

> Find updated information on the Wiki

The Proyecto Ríos visualization aims to show the data gathered by volunteers in an easily accessible, original way. To do so, we base our work on the metaphor that the river is shown to the extent that the population becomes concerned and involved in how healthy it is.

The visualization offers a map of the Comunidad de Madrid (Madrid Region) in which the original rivers are seen in the background. The river sections where groups of volunteers carry out inspections are shown with a dot, such that where the dots along a river meet (various sections that have been inspected), the river moves into the foreground, which “makes the river real”. At the same time, each of the dots provides information on the river’s degree of health, given that users can consult the main parameters obtained in the river inspection (pH, flow, the presence of flora and fauna, etc.).

An online form has also been created so that volunteers can add the results of their inspections. They are directly added to the application’s database. This operation can also be carried out via mobile telephone.

> More information on the Wiki and Proyecto Ríos

FLUflux is a data visualization project showing significant correlations between global pandemics (SARS, Avian flu and influenza A), international flight travel, media representation of disease and online individual responses. The changes in the influx of people traveling between countries reflects historical events. FLUflux highlights these changes by focusing in the concept of "global disease".

> More information on the wiki and http://threeecologies.com/fluflux/

Invited project: In the Air 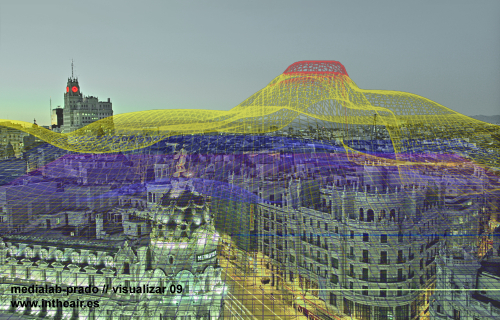 The project aims to visualize the microscopic and invisible agents in Madrid’s air (gasses, particles, pollen, diseases, etc.) in order to match their behavior, their reaction and interaction with the rest of the city.

The following lines of work will be developed:

> More information on the wiki and www.intheair.es

>More information about the projects on the workshop wiki