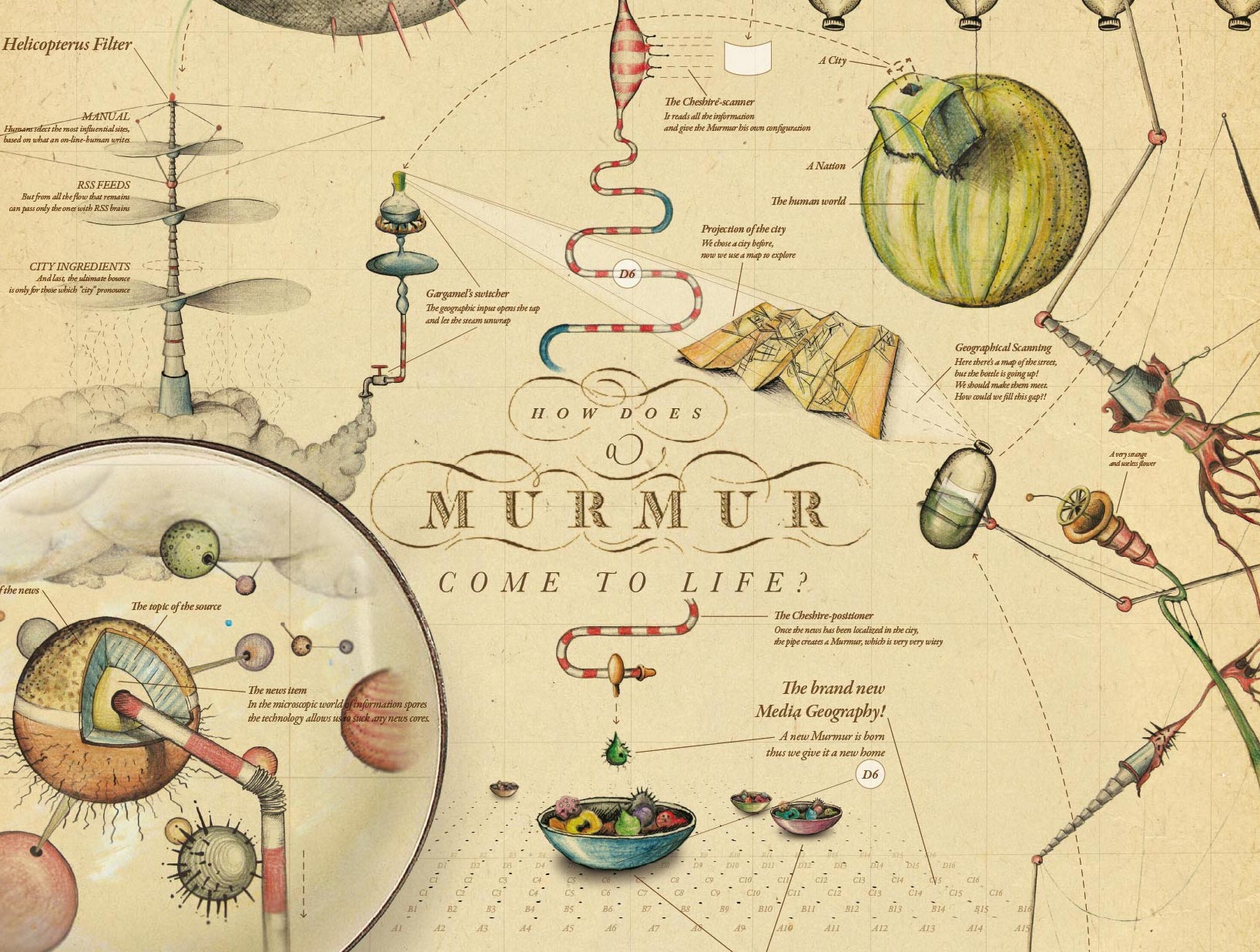 After the experience of VISUALIZAR's first edition on November 2007, where the social, cultural, political, artistic and scientific possibilities of data visualization were tackled, VISUALIZAR 2008 is focused on the city context. Urban environments, which are becoming increasingly dense, complex and diverse, are one of contemporary society’s largest “databases”, daily generating volumes of information that require new methods of analysis and understanding.

In this international workshop, directed by José Luis de Vicente, seven proposals have been developed. Thay can be seen at Medialab-Prado until January 11.

The project aims to make visible the microscopic and invisible agents of Madrid's air (gases, particles, pollen, diseases, etc) to see how they perform, react and interact with the rest of the city. With 3d modeling tools we will build up the space they generate for an on-line dynamic model, where through data crossing behavior patterns will emerge. The results of these analysis will feed a physical prototype of what we have called a “diffuse façade” a massive indicator of the air´s components through a changing cloud, blurring architecture with the atmosphere it has invaded and mediating with the human bodies it surrounds.

Visualising the media attention to the urban space, street by streets. Official news, blog and personal website, thematic media will be monitored to generated maps that highlight the pattern of perceptions on the urban space. This mapping will lead to the creation of an atlas that will monitor in time the changing perception of the city areas. The atlas will produce different dynamic visualizations based on themes, sources and time.

Much Ado About Nothing

Noise pollution is a problem that thousands of Madrid residents live with daily. Recently, in 2006, a first step was taken toward a possible solution with the creation by the Madrid City Government of noise maps by district. However, that information still needs to be made simply and clearly accessible to all residents.
This project proposes to create an interactive tool that makes it possible to consult our city’s noise level on the Web. Through this map, you can have direct access to the noise level in decibels on your street.

The recent implementation and success of Bicing in Barcelona suggests the possibility of studying its impact on the city via mass data processing tools.

This project aims to trace the uses of this complex system of 400 stations and 6,000 bicycles to extract patterns of diverse periodicity that serve as a tool to read it and for the potential implementation of a similar system in other cities.

This project proposes a way to map out areas of cultural interest in Madrid, to be used by the disabled. We will work with disabled people who will take GPS receivers along various tourist routes and provide information on which areas are accessible to them and which are not, due to architectural barriers.Go t

Eco-visualization[EV] aims to provide dynamic visualization of invisible variables of environmental information and hormonally active synthetic agents such as synthetic chemical substances, neurotoxins, DDT, PCBs, dioxins, bisphenol-A (BPA), dibutyl phthalate (DBP), octilphenol (OP), asbestos, CFCs, etc., as well as the associated effects on human and non-human organisms. It will be carried out through the construction of a biocentric digital system and the physical presentation of this information in urban space.

This project is a continuation of the Cartografía Crítica del Estrecho de Gibraltar (Critical Cartography of the Strait of Gibraltar) carried out in 2004 by hackitectura.net, Indymedia Estrecho and associates/collaborators.

The proposed development is the visualization of migratory, economic, political and cultural flows through the territory-border comprising the south of Europe and the north of Africa, in an augmented reality environment.

With the support of Madri+d