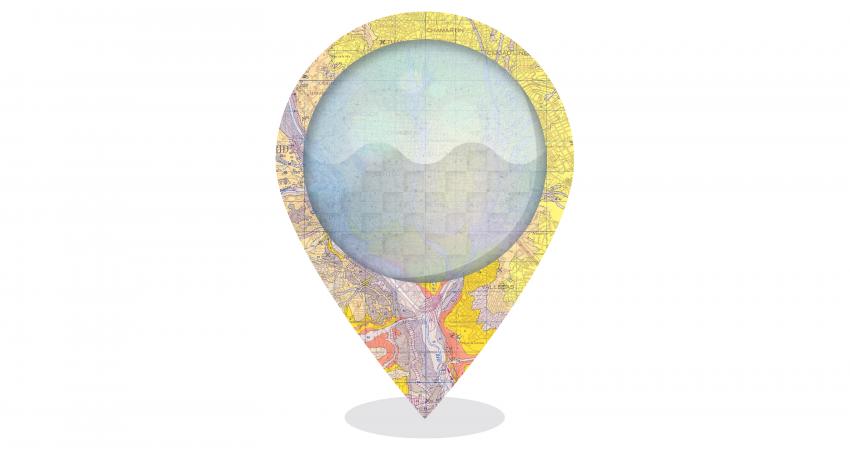 Based on a cartographic analysis of the groundwater of Madrid, a geolocation device will be created to make derives through the city.

This project consists in an urban derive by analyzing the hydrogeological map of Madrid. The proposal will be formalized by creating a tool of geolocation that allows following the course of subterranean water flows through the city. A study of nature beyond the human interference and the rambling constructions, in a search for a territory or confusing emotions. The passage will obviously be interrupted; but however, through the exploration of space and the construction of a new psychogeographic map, the subject through an unexpected twist turn into a participant in the game.

Beatriz Page.
Graduated in Fine Arts by the UCLM in Cuenca. PhD student in Research in Humanities, Arts and Education. Experience in publishing, graphic design and illustration. Currently, she collaborates in La vanguardia, digital section of Technology. Skills in graphic and digital design, video and sound edition. Basic skills in HTML and Actionscript.

Anna Katarina Martin (http://annakatarinamartin.com)
Artist, researcher and educator in visual and multimedia art. Graduated in Fine Arts by the UCLM in Cuenca. She holds a Master of Visual Arts and Multimedia by the UPV. She currently works as a mediator at the Imprenta Municipal Artes del Libro and at MNCARS in Madrid. Specialized in audiovisual creation; Video and sound  production, motion graphics and digital design. Basic skills in electronics, streaming, programming with pd + arduino, HTML and Actionscript.

Raúl Hidalgo (http://www.raulhidalgo.net/)
Artist and teacher in the Faculty of Fine Arts of Cuenca. With a PhD in Fine Arts at the University of Castilla-La Mancha (Spain) and Postgraduate in Visual Communication from the Hochschule für Bildende Künste Hamburg (Germany). He received several awards, scholarships and grants for contemporary artistic creation and has developed site-specific projects in cities such as Berlin, Stockholm, London and Madrid, and his work has been shown international group exhibitions.

Profile of the collaborators

Programmers and developers of mobile applications that, based on a map of the groundwater of the city center, can develop a geolocation application that allows us to follow the hydrogeological route and identify the different zones through sounds and vibrations.

Geologists or experts in hydrogeology, hydrology, interested in contributing with their knowledgement to the interpretation of the cartography and the analysis of the available data.

Artists, designers and people who like to walk. People with an open profile willing to collaborate and contribute in the global vision of the project or in the practice.