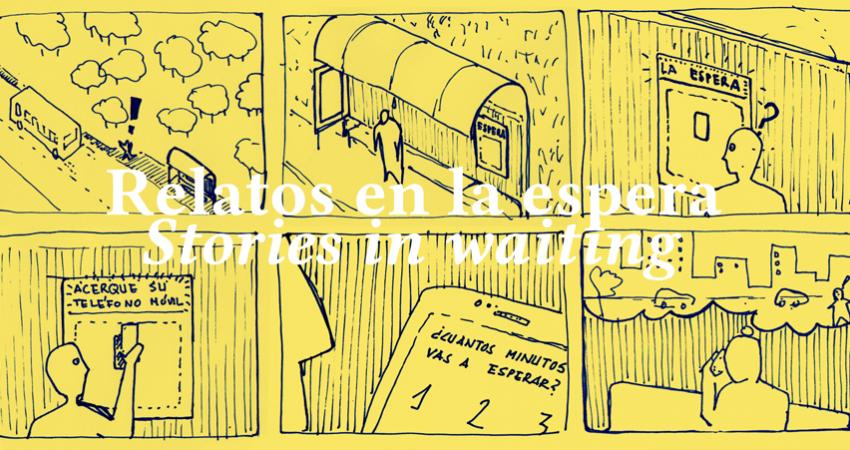 Before we start moving with public transportation we experience the 'waiting', an insignificant and dead time. What object or event can wake us from the lethargy of this waiting time?

Today, communters always tend to be notified of their waiting interval. The project wants to take advantage of this, reaching an alternative use of time which involves the traveller in a suprising and enriching experience.

It is proposed to develop a prototype which will turn on once the waiting time begins. A signal should invite the user to bring his o her mobile phone closer. Then, he or she will interact by answering about the estimated waiting period. Once answered, a time-adjusted micro-story will start playing on the phone. An action that will allow the communter to travel without moving.

José, Francisco and Katerina, architects and teachers in different universities, met in Madrid while carrying out their respective PhDs. Since 2011 they have developed joint projects: In the architectural field through Kune | Office, obtaining several prizes in international competitions. In the editorial area with the publication of ‘HipoTesis: Blockbuster’, awarded with FAD 2016 Thought and Criticism Prize (ex-aequo).

Writers or text curators. People who is willing to write stories, who wants to take on the challenge of condensing them in minutes. Curators of micro-stories that will be interpreted by actors and heard by an audience waiting for public transportation.

Actors or storytellers: People who know how to tell stories and interpret them with the voice.

Sound technician: Able to record a sound correctly for a later smooth playback.