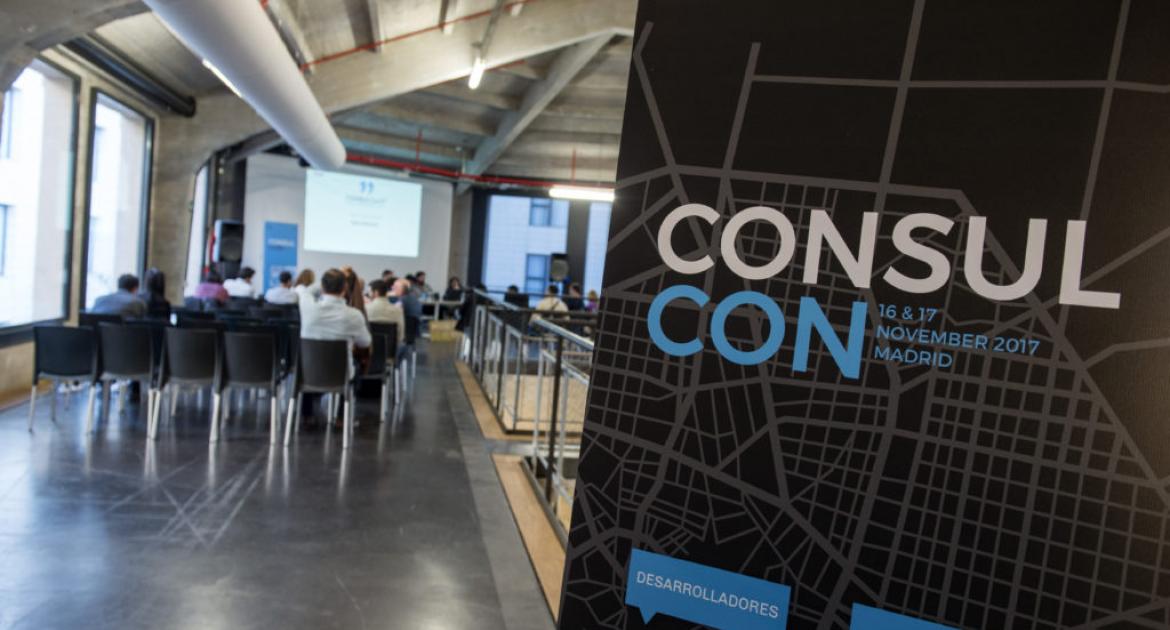 They are all part of the international network of cities and institutions that use Consul, the free software at the heart of Decide Madrid, the civic participation platform of Madrid City Council. The network of Consul cities, made up of more than 60 institutions, took part in the first edition of ConsulCon which was held in Madrid on the 16 and 17 November 2017.“The act of voting is important, but it is not enough and we can do better”, stated Beth Noveck, director of GovLab during the opening ceremony of ConsulCon17. She reminded those present that “with the power of technology we can and must make the difference”. With these powerful ideas, the conference got under way.ConsulCon17, two days of collaborative work and technical conferences took place in MediaLab Prado within the framework of “Democratic Cities”. People from all over the world, current and future users of Consul, experts in participation, developers and programmers, civil servants and politicians gathered together to rethink and redesign the participatory tool based on user experience. In all, 2 days, 27 presentations and more than 300 participants from more than 60 cities in Spain and overseas.

Pablo Soto, the Councillor responsible for the Department of Civic Participation, Transparency and Open Government revealed that when they created the platform, they were convinced that Consul would be a “project that would change the world”. A few years later, this utopia is starting to become a reality. Consul has been in existence since 2015 and already, only two years after its creation, more than 60 institutions around the world have begun using it. But using it does not only mean making use of its advantages rather it means you are part of the Consul community in which everyone develops and exchanges experiences and knowledge of how they use it, in a collaborative and horizontal way. And this is what happened in ConsulCon17.

Briefly, for governments and institutions: Consul makes it possible to carry out different participatory processes and to govern in conjunction with the general public. It can be applied to any institution and it is easily adaptable. For members of the public: Consul is a platform that allows you to put forward, vote, debate, and decide on the city you want and desire, based on binding actions, through mechanisms of direct and participatory democracy. Consul allows you to configure and use participatory mechanisms such as Citizens’ Proposals, Participatory Budgets, Collaborative Legislation, Debates, and Votes.

In rather more technical language, Consul is a platform based on a framework of open-source web applications written in the Ruby programming language that was created by Japanese programmer Yukihiro “Matz” Matsumoto. https://github.com/consul/consul. Throughout the meeting, computer engineers and developers worked side by side with civil servants, politicians, and the general public. Through hackathons, workshops, and working groups coordinated by Consul’s technical teams, they explored new functionalities and came up with experience-based solutions for the platform. They also carried out different methodologies based on design thinking and they considered how to improve the platform so that it might provide greater value to the general public and civil servants alike.

These hackathons and workshops gave rise to specific technical results that were skilfully summarised by Manuel Ortega in his blog “Challenges for Participation in Cities and Organisations”. Progress was made on how best to display the information published in Consul; conversations and work ensued with organisations in order to adapt the platform to institutions other than governments; mechanisms were designed to encourage participation, such as, for example, rewarding the most active users; progress was also made on how to integrate the logic of decision-making by consensus.

One of the questions that was raised most often during the ConsulCon seminar was how can we build a more participatory culture? In a space in which synergies flowed naturally, in an atmosphere of all for one and one for all, answers to and powerful ideas for these questions were found. The actual testimonies of the administrations were key. And although the context of each city and institution is different, they all agreed to accept the challenge of civic participation and participatory culture and to bring about a real democracy that combines technology, participation, and collaboration.

Aurora Madrigal Suarez, from Montes de Oca, Costa Rica, is the person responsible for the participatory budgeting process there. She says that Consul can reach all those difficult-to-reach populations so that they can participate with their proposals. With reference to a problem all cities face, none other than that of the digital divide, Joan Arnal, the person responsible for participatory budgets in Tarragona, suggested that “the digital cultural divide is something that we ourselves in public administration have to fill, it’s not something we can expect the citizen to fill”.

On the other hand, Mari Romero, a councillor in the Technology and Citizen Attention Department in Huesca, recommended that participatory processes “must be planned and they have to work. People have to see themselves reflected in them. There has to be accountability. And they must be a step toward recovering democracy” Meanwhile, Carolina Toro Morales, Sub-secretary for Planning and Evaluation in the Government of Jalisco, Mexico, shared the importance of participatory budgeting in remote rural areas far removed from the city and where there is scant State presence. And how it has changed the lives of the residents of such areas.

Consul can be translated in different ways depending on the needs of each locality: Zamora Participa, Huesca Decide, Toledo Participa, DecidiTorino, GanaPienso (Nariño, Colombia), Buenos Aires Elige, Aporta Aberta in La Coruña; to mention only a few of the many cities that have implemented the platform. While in Toledo they chose Consul “for those people who don’t go to assemblies or council meetings, but who want to participate and don’t know how to go about it”, said Alan Galan Soria, the Councillor for Civic participation and Transparency in the City of Toledo. In Zamora, Javier González, Coordinator of Zamora Participa, told us: “We chose Consul because it is a free software platform and because it ensures total and absolute transparency as to what happens to the general public”.

In ConsulCon17 specific experiences were lived. Horizontal and decentralised debates, in which each and every moment was made good use of, including the coffee breaks and lunches, to exchange opinions and to talk about democracy and technology. A wide network of global Consul cities has been woven, and it continues to grow. During the seminar, this community benefited from the incorporation of 7 new cities: 5 in Latin American and 2 in Spain. More than 60 developers work for Consul, and during these two days they were all there together hacking the platform, learning and defining how to collaborate effectively to enhance this tool which belongs to the general public.

Not only did they talk about programming, codes and Ruby in ConsulCon17, but also and above all they reflected on democratic innovation processes, mechanisms for civic participation and the use of on-line technologies and platforms. The Consul team, civil servants, users and promoters of the platform proved to be always open to taking on new challenges: coming up with solutions to previously unresolved problems, recognising errors and failures in order to continue growing and moving forward. Because the ultimate objective and what drives them is the promotion of participation. As Beth Noveck said: “Civic participation is the solution and the answer”.