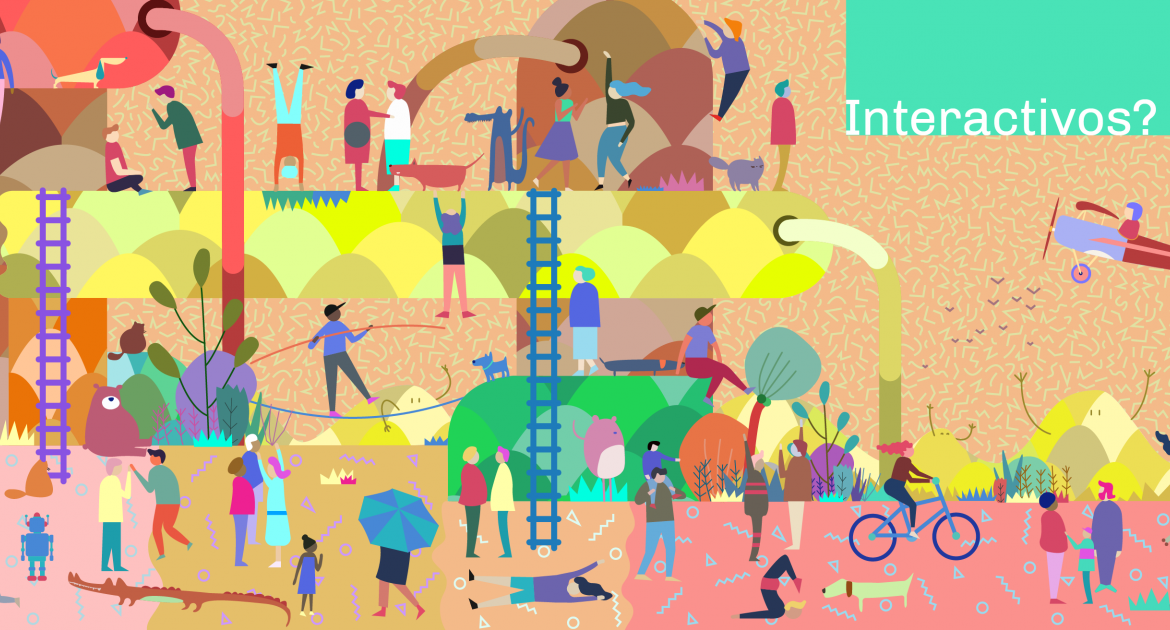 Application to reduce the ecological footprint of your shopping basket

The ecological impact of our food consumption can be reduced in very different ways (eg consuming fresh produce, nearness and season or reducing the consumption of meat, fish ...). This makes the information that the consumer has to handle very complex. For this reason the project focuses on developing a mobile application that estimates and reports in an easy way about the ecological footprint of the food products of its purchase. 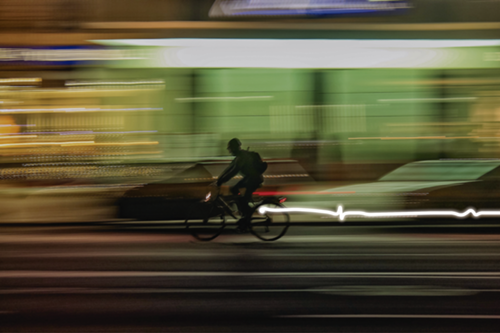 We live in cities that are getting bigger. The environmental, economic and social impact of our daily commutes reaches unsustainable levels. This scenario forces us to think of more sustainable forms of mobility and to promote healthy lifestyles. The bicycle is an essential part of the construction of this new urban mobility. Issues such as comfort, road safety and the speed of travel condition the adoption of this means of transport. These obstacles are particularly important in the context of the "new" megacities of Asia, Africa and Latin America.

With limited information gathering resources and capacities, how can these cities make intelligent mobility decisions? The quality of the surface in which it transits has a very important impact on the comfort of the trip but the cities lack of agile and efficient detection mechanisms that allow to measure its deterioration.

How can we transform cyclists into surveyors?
The C.O.S.O is a module that allows cyclists to collect information about the state of the streets as they travel on them. The module attaches to the frame of a bicycle and measures by an accelerometer the force of the impact when passing through a particular road or track.

Guateque In-capable is a multi-sensory activity of a ludic and inclusive nature that aims to turn the word "disability" and transform the so-called "special needs" into simple circumstantial needs. The participants of the workshop will share a process of collaborative experimentation and learning in which, through experience, they will see that there is no one way to do things, but many and very diverse. In this way it is hoped to create awareness about the functional diversity and what the different abilities suppose when it comes to inhabit a city, breaking the barriers of inaccessibility and maladjustment and building among all a friendly and safe habitat from the respect and the empathy. 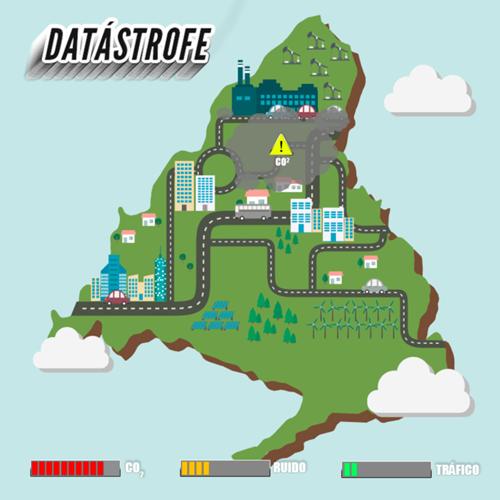 Datástrofe is a video game that will challenge the user to overcome adversities and catastrophes generated in real time through the capture of data of emissions of gases, environmental noise and traffic, with sensors distributed by the surroundings and of online services of data capture.

The player must overcome a scenario in which he will act to counteract the negative effects generated by the interpretation of the environmental data captured through sustainable actions such as tree planting, construction of bicycle lanes, creation of pedestrian zones or other similar actions. 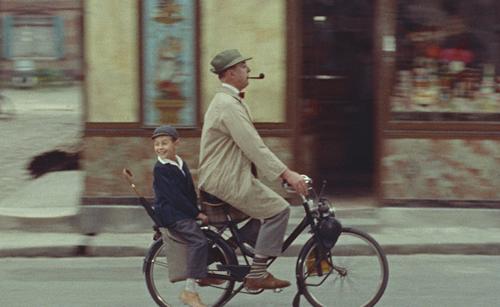 The multitude of trips that we make in the city require a minimal planning. The daily journeys can be reinterpreted and the less habitual ones can be a trip in themselves. The study of routes with the combination of different modes of transport in the city does not exclude the use of the available app to devise a combination of the existing ones that collect the main indicators to make explorations of routes with the suitable alternatives.

Consideration of climatic parameters, congestion, pollution, psychological aspects, quantification of physical effort and mental concentration, travel of favorable urban landscapes, spatio-temporal references, phenomenological experience and measures of satisfaction are some of the factors that shape the route.

Cartographic analysis and sensory "mapping" can lead to more accurate x-rays through experience. Combining in all aspects, with a multidisciplinary character, the study for different ages and conditions, completes the range of possibilities of mobility, with the broad understanding of the diversity of options.

The movements that are drawn in different table games can be imitated in the urban environment with a composition determined according to the objectives. Observation and experimentation converge towards an approximation of representation and reality.
In a first stage the operations to be carried out are studied. In a second stage they are experimented and recorded and in a third they are reviewed. A complete process of realization and optimization pursuing operational research. 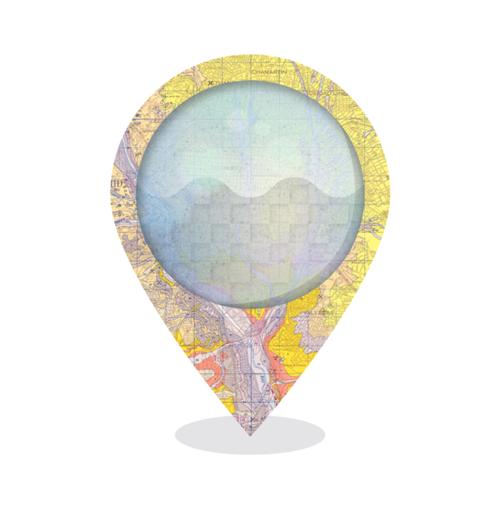 In order to propose a notion of trip and of different walk, in this project will try to carry out an urban drift from the analysis of the cartography of the underground waters of Madrid. The proposal will be formalized in the creation of a tool of geolocation that allows to follow its course through the big city. To study the behavior of the alien nature to the effects of the human currents and the labyrinths of its constructions, to be left during a time to the search of a territory or confusing emotions. It is evident that the passage will be interrupted and the multiple interferences; However, from the exploration of space and the construction of a new psychogeographic map, the subject will take an unexpected turn that makes him participate in this game.

"Under the cobblestones, the beach", which the French revolutionaries sought in May 1968, embodies the message in a subtle way that fights against the established. In parallel and below the visible, the rigid happens the occult, the flow of water that in its own drift hides other notions of touring the city. The idea contained in this sentence, condenses the vision of this proposal that puts the starting point in a situationist procedure, as a technique of experimentation, which is accompanied by playful and constructive practice.

Although there is no beach here, the history of the city that "over water [was] built" is linked to its origin. Madrid owes its name to an Arab settlement "Magrit", which means channel, which was once a Visigoth "Matrice" and whose meaning is stream. From his memory we also recovered for the title of the project, Water journeys, the name given to the set of underground pipes that channeled water from different aquifers of the land occupied by the city in medieval times.

Stories in the waiting 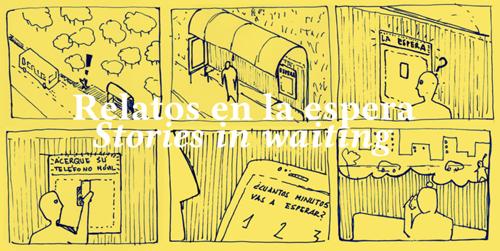 Before we start moving with public transportation we live in the 'waiting'. Today, the first thing that those who wait are doing is to count the time that remains. As if this were an interval fallen into disgrace, a time to forget.

The metro, bus or train stops are part of the category of 'non-place' (Marc Augé), precisely because the time spent in them is a dead and insignificant moment. How to restore consciousness to these places? How to help build an active standby? What object, event or event can awaken us from the lethargy of waiting?

I missed the bus.
There is something strange about the stop. What is it?
Something sounds and invites me to bring my phone. Mmm how weird
I close the phone and it rings! Do I have to answer?
A notice asks me for my waiting time ... 10 minutes.
And suddenly, on the other side of the phone, someone tells me a story to the contrary ... Will it finish before the bus arrives?

Then the space expands, the time is shortened, the wait is diluted ... Everything acquires another dimension and leaves a trace in my daily life ... 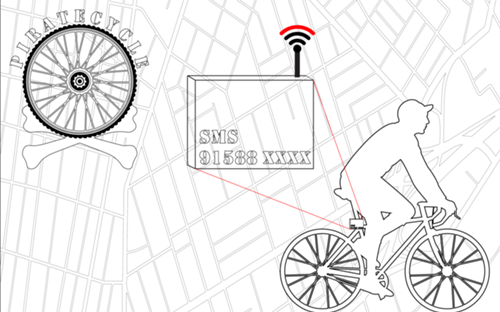 The PirateCycle consists of the design of a hacking device for mobile units, capable of transporting ideas to different areas of the city. The project seeks to explore three areas of development: alternative mobility, citizen participation, and radiofrequency governance. The project combines two different connotations of the pirate: The pirate as a hacker, one who seeks to break or modify the mechanisms with which a certain system, whether mechanical, electrical or computer: and the pirate as one who transports goods illegally. Through the use of these meanings in the design of the device, attempts are made to rearticulate the interweaving of the city through what Foucault would describe as the heterotopy par excellence: the pirate ship. The device consists of a portable SMS module, built from the FONA circuit of Adafruit, mainly intended to be attached to the frame of the bicycles through a set of neodymium magnets, but applicable to any mobile unit with a metal body.

The module hampers the main function of the means of transportation vehicles, to turn them into an alternative means of dissemination and propagation of contents. This module aims to create a content propagation network, but unlike the extremely structured communication networks posed by the Smart Cities models, this network is constructed through uncertainty and chance in a more similar logic to how pollen travels through the flowers using insects as a means of transport. Thus the PirateCycle also becomes a para-site of the vehicles in which it is lodged and to which it avails to fulfill its function. While the vehicle is in motion, the device takes advantage to rest and draws its energy from the movement through a coil that is superficially coupled to the tire of the vehicle. When the vehicle stops, the device wakes up and a light message begins to flash, prompting the people to send an SMS to a certain number. All people who send a message to the device will be added to a user registry, and all messages will be simultaneously sent to the total set of users.

The objective of this action is to create a communication network capable of disseminating content without affecting geographical, social or cultural barriers, not opposing any of these limitations to potential members, and instead creating a topography ruled by chance. Finally, each time the device finds an open network of Internet, it connects to share its location, deduced through its IP, which will create a map of its displacement; and at the same time will use to share with other potential devices the number of registered users, allowing to increase the network and modify its topography.