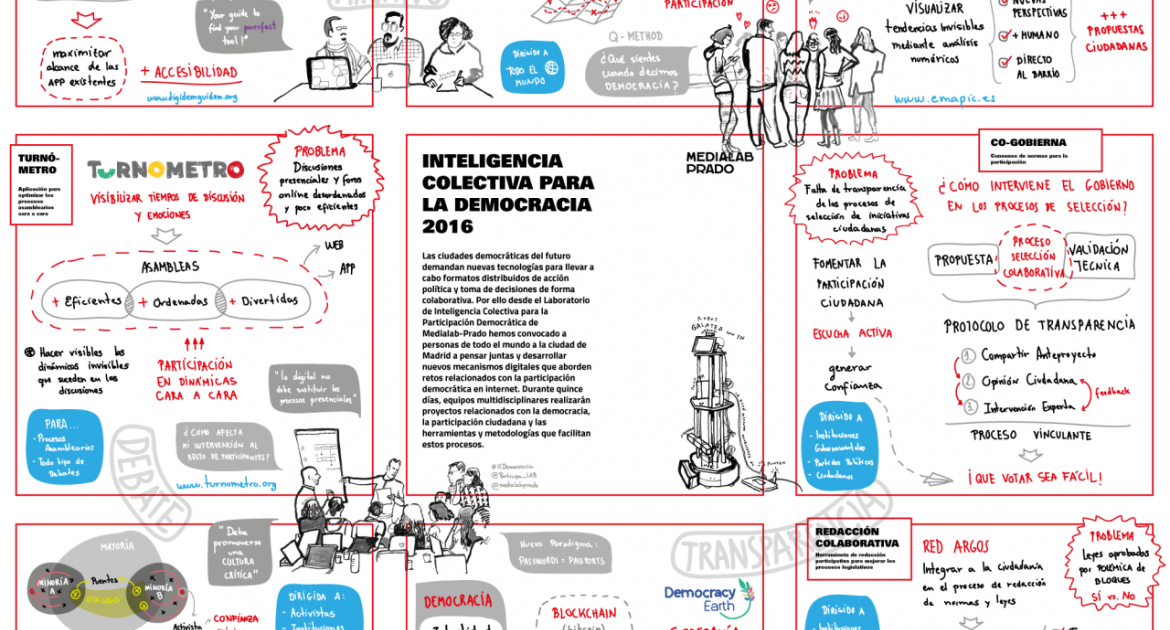 Audrey Tang, Taiwan’s Digital Minister, is at MediaLab Prado. She occupies an inconspicuous seat in the first row of MediaLab Prado’s auditorium, and users her camera to record the presentations each group has been allotted ten minutes to make. She holds her Mac on her lap and balances on the tips of her toes so that it doesn’t slip off. She addresses everyone with kindness and a small smile. She might even come to be a symbolic metaphor of the democracy of the future, the democracy that aspires to be reinvented as a joint effort by many people, by what is referred to as ‘collective intelligence’, since traditional forms of leadership aren’t working. We know who she is, what she has done and what she does, but nobody would say she’s the Digital Minister of one of the most technologically-advanced countries in the world –Taiwan– which is highly placed in all international open data rankings and experiments freely and openly with initiatives and tools for citizen participation in public affairs. Audrey rests her blue rucksack on the floor, next to her seat, and listens.

We all listen to Jesi, to Irene, to Francisco, to Manuel, to Virgile, to Maite, Henrique, Pablo… Why do people participate? What democratic innovations and tools are being used, and where? How does the process work? How can we give minorities a voice? How does my presentation impact the audience? Has anyone considered geolocating proposals? Can we make better laws? What can we do to involve people? Not all of the projects are prototypes that are already available –some of them are and others will be shortly– and they are at various stages of development. One person even conducted a real, digital survey on emotions and democracy: it was converted into poems. Let’s have a look at them. At the projects.

This “Mexican-style” group developed a website and a mobile application available for Google Play (formerly Android) devices, a tool conceived and designed for the purpose of debate and discussion, to foster assembly-style dynamism on the internet as well, and to ensure balanced and more efficient discussion. How? By synchronising watches in regard to debate times and speaking turns. “We saw that if there’s no order in the debate things can get complicated, and we started to explore other alternatives. One of the best practices is to request permission to speak, [to have] turns, times, an agenda of points for discussion… we believe the emotions involved in discussions are very important”, stressed Irene. The tool shows who is going to speak. You can request a turn and it shows the amount of time each person has talked. Along with a website and an Android app beta, they also created a Telegram bot, social media accounts (Twitter and Facebook), a Spotify list and a diary chronicling the process.

“Petter, Sara, Ram, Nichole, Jennie, Nasy, Manuel… We’re Digidem, a guide to digital democracy and participation”. This highly international team decided to have a Demo Cat  that would serve as a guide to the process. “Demo Cat: I’ll be your guide to find your perfect tool”.

In their presentation they gave a detailed explanation of the learning process. Initially they envisioned an app that would bring existing participation tools to organisations. The target audience included NGOs, political parties and local authorities. However, after thinking, rethinking and interviewing others, they observed that people don’t want more apps. “We identified profile types, we aimed to find a simple design suited to the user’s needs and we used the Sprint methodology; moving to a real prototype even if it wasn’t actually a ‘real’ one, in order to experiment and be able to improve”. The result is a guide that aims to provide information on the best digital tools available. An exhaustive list of tools, a practical list that reports the opinions that each tool provides: from inciting discussion to generating ideas, deciding on a matter and evaluating.
You can find it at digidemguide.org/polis/

3. MAPPING THE DEMOCRATIC INNOVATIONS OF MADRID AND MEDIALAB PRADO

Participedia.net is a participative/collaborative online platform that catalogues and documents the various processes of political participation and democratic innovation being developed around the world, and this global project was used as a basis for the mapping of Madrid. The team created in the international MediaLab Prado workshop led by Jesi Carson documented all of the participation and collective intelligence experiences that have been undertaken in MediaLab (all of the projects, what ParticipaLab is, tools like Pol.is and vTaiwan)… but they also hit the street. The digital and the real. “We got a chance to discover stories and feed the platform, focusing on some experiences in Madrid like This is a Square (“Esta es una plaza”), the cultural cooperative Teatro del Barrio, La Tabacalera Social Centre and the Mortgage Victims Platform (“PAH”)”, said one of the group’s members yesterday. Another participant, Lucy J. Parry, documented Qmethod –used to measure subjective elements– over the course of these days, when she conducted a real, digital survey on the sentiments inspired by democracy and converted the results into poems. Following the methodology, everyone can participate in and collaborate on this project: strengthening democracy through shared knowledge.

4. CO-GOVERN: PARTICIPATION FOR CONSENSUS ON REGULATIONS

Much deliberation, searching for consensus, endless debate, learning to converge… It wasn’t easy, they all conclude. This was a very numerous group of people with very different profiles, which presented the conceptual and graphic design for Co-Govern (“CoGobierna”), a tool for binding and transparent participative processes. They asked “What can we contribute”? After assessing existing tools and determining the best and worst features of each, they decided to pursue a binding prototype: “We didn’t want an endless forum or impossible proposals to which public authorities would never commit”. The tool is structured around various stages: political commitment for it to be binding, drafting of proposals and automatic selection of possible proposals which meet the budget and timeline requirements. The interface offers a simple and user-friendly design “where voting is easy”, a timeline where you can see points in favour and against, tracking of each proposal and the parameters based on which it was selected.

Using the tool developed by the “Turnómetro” group for their presentation, this project originated in Paris and is based on the notion of using decentralised software and building an incorruptible system of decentralised governance. They advocate being more political, more critical and more creative. Undertaking open-source politics.  Virgile Deville presented the idea for this project on 18 November, stressing that “democracy needs serious technological improvement”. And the overarching question for this team’s members over the past two weeks was: “What is a post-sovereign nation-state?” The final product is a web application, a secure voting solution, which is based on block-chain technology (the technology behind Bitcoin enabling reliable and safe transactions without the need for an intermediary) and on the concept of liquid democracy (direct democracy where voting power is vested in delegates). A Smart Contract protocol that enables decentralised governance of any sort of organisation. The key issue was identity validation.

You can find it at sovereign.software/

The work carried out by this team enabled them to map proposals contained in CONSUL (software used by the Madrid City Council’s platform Decide.Madrid). Yesterday they presented a demo mobile app “which enables us to position the sentiments and feelings of a person… or whatever we want… on a map”, as a satisfied Jorge, the Galician developer who led the project, described.

The aim was to integrate geolocation into citizen participation via connectivity between CONSUL and EMAPIC (geolocation opinion software designed at the University of La Coruña). After coming up against the thorny issue of privacy –via municipal census– they ultimately decided to visualise opinions and positions on a map.
“Now we can display opinions within a territory and carry out a spatial analysis of participation. With this app we can view the support a proposal has received on a map”. With EMAPIC+CONSUL, all proposals are geolocated, each one of them is selected and people participate with a view to construction. “Our idea –added Conchi, one of the project’s participants– was for it to be something direct and for it to automatically locate opinion. We believe participation can be fostered to a much greater extent in this manner”.

You can find it at Mapping your feelings

7. PUSHING TOGETHER, GIVING MINORITIES A VOICE

“When a lie is repeated a thousand times it can become truth. We don’t want decisions to be made based on lies. When we’re minorities we don’t have tools and that’s why we developed Pushing Together (“Empujando Juntos”): we want to create tools to give a voice to minorities, enabling them to be heard and people who have questions to view a diverse range of opinions”.
Henrique Parra presented Pushing Together, an application that was developed from Pol.is software but whose architecture is free and independent and can be implemented into any other software. This group, christened “the Brazilians” at MediaLab Prado, aimed to start with Pol.is, whose CEO and founder attended the #CIDemocracy workshop to give a talk, and then to improve its usage for the common good. Colin Megill met withPushing Together and announced some good news. During those days they researched and documented how Pol.is functions and finalised their proposal, a tool that aims to activate participation and offers citizens a push button to ‘push’ their arguments, allowing for two options: ‘talk’ and ‘event’. Citizens can send a comment to people they agree with or create an event and invite those who have agreed with the comment they have made. The next step is to test it out in the cities of Brazil. A surge of extra energy that comes from a Push.

This group debated a great deal, and about practically everything. From the good, the bad and the ugly that is sausage-making –using the sausage in their presentation as a metaphor after finding 3,907 results describing how to make them– to debating the very concept of deliberation (without settling the issue), to how to integrate minorities, to abandoning the role of the expert, to how to make better laws. After speaking with many experts and getting an idea of available tools and the current situation, they rethought the mechanism for participation. Everything was inspired by Otto von Bismarck’s famous quote: “to retain respect for sausages and laws, one must not watch them in the making”.

They have created an interactive tool –they presented a concept demo– that enables citizens to participate in debate and propose changes regarding the drafting of legal regulations; to make contributions, reach consensuses and dissent. “We believe that if the process of making a law is improved, the end result is also obviously better”. Two different roles have been set up: that of citizen and that of moderator/drafter. The former can select a text and choose one of three options –‘yes’, ‘no’ or ‘give an opinion’– and has the option of viewing previous opinions and arguments or creating their own. “We have devised a way of measuring dispute. Moderators could decide to rewrite the article in order to improve it”, concludes Pablo Ojanguren. They’ve called it the Argos Network (“Red Argos”), a network where many eyes are keeping track of contributions.